Did you shoot in raw and find a magenta cast on your photo?  Why is that happening and more importantly, how do you fix it?  That’s the topic of this post!

WHY YOU GET A MAGENTA CAST

The short answer is that it’s a limitation of the camera’s sensor.

Here’s the long answer: your camera sensor has a limited dynamic range.  When a light source is too bright, the sensor cannot record more information and it is simply recorded as 255 (the maximum value from 0 to 255).  This is called clipping.

I had this issue with my Fuji S5 Pro, and the Xiaomi Mijia Mi Sphere seems to have this issue when shooting in Adobe DNG Raw.

HOW TO FIX THE MAGENTA CAST EASILY

The simplest way to fix the magenta cast is to cut off the red and blue channels at the same point as the green channel.  Here’s how.

Step 1.  Adjust the exposure, white balance and other basic settings to your liking. Don’t worry about the magenta cast yet. 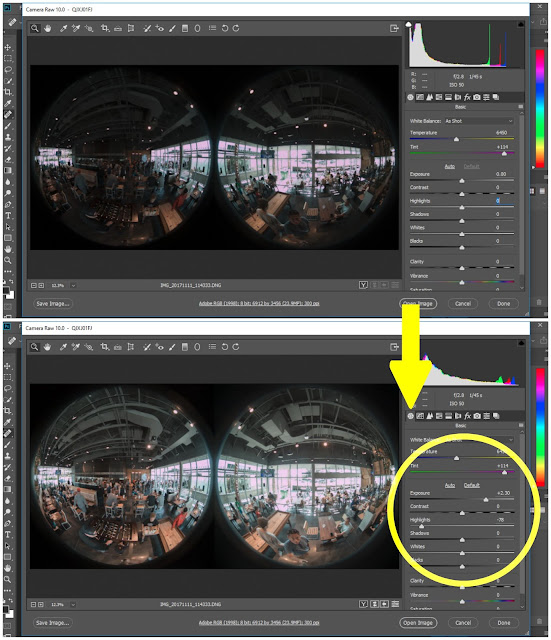 Step 2.  Adjust the tone curve:  in Camera Raw, go to the second tab for tone curve (in Lightroom it’s below the basic adjustments).  Drag the tip of the curve to the left until the magenta cast is gone. 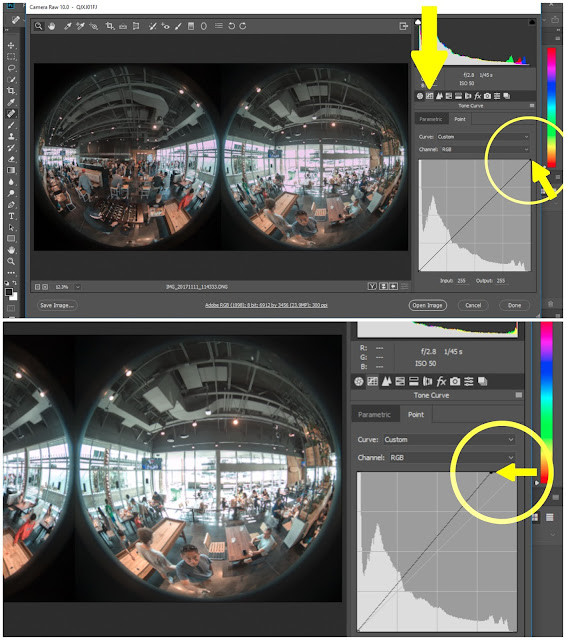 That’s all.  From here, you just export the raw to JPG and stitch with your preferred panoramic stitcher.

ARE YOU LOSING HIGHLIGHT DATA WITH THIS METHOD?

Yes and no.  Yes, in the sense that there’s red and blue highlight detail that would be lost.  No, in the sense that the portion that is cut off (with red and blue channels only) is of limited use because it has no green channel information.  But if there are important details that you want to preserve, you can create another version of the photo, correct the color by pushing the green channel, and when the previously magenta parts are balanced, mask those highlights into the photo where you clipped the highlights.   Why not just use this version instead in the first place?  Because if you push the green channel, the rest of the photo will have color that doesn’t look right.

Do you have a better process for fixing the magenta highlights?  Pls. post in the comments!

Easy and free tutorial on how to edit 360 videos (with affordable software)
Beyond Tiny Planets: a tutorial on other 360 photo projections by RubenFro
Comment