Are you looking for more storage for your 360 photos and videos?  Here’s a hands-on review of WD My Book Duo, a fast, expandable external hard drive.  However, it has a potential dealbreaker – hardware encryption (see below).  I’ll also discuss the basics of RAID.

There is a power button at the back that will automatically eject the hard drives from Windows before powering them down. Note: you should press the side of the button close to the edge of the drive.  If you press the other side, it might not recognize your button press.

When you pry the top of the My Book Duo, you can see that it uses standard 3.5-inch hard drives that you can easily replace.  It includes two WD Red hard drive, which are used for NAS drives.  In the future, if I need more storage, I can just replace the hard drives instead of buying an entire external hard drive.  It’s more economical and better for the environment.  UPDATE: According to Western Digital, the compatible drives are WD Green and WD Red.  They do not say that it is compatible with other drives.

Besides expandability, another advantage of My Book Duo over a single external hard drive is that it can be reconfigured for better reliability, or higher speed using RAID (see below). 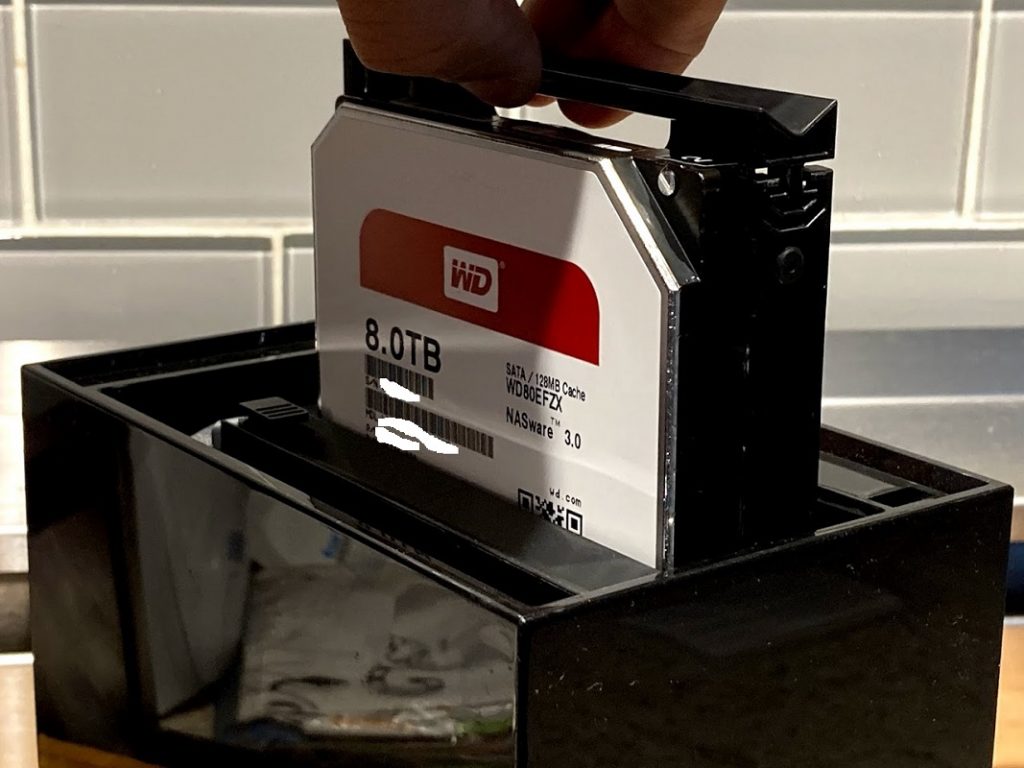 I found that My Book Duo was generally quiet although it hummed a bit louder than My Book.  The reading and writing sound wasn’t annoying.

WHAT IS RAID AND HOW DO YOU USE IT?

When you have multiple hard drives, you have several options for using them.  Some options trade space for security, while others trade security for speed, and there are many options in between.  When multiple hard drives are used together with these options, they are in a RAID configuration (Redundant Array of Independent Disks).

With this configuration, the two disks inside the My Book Duo are treated as independent hard drives (each one has its own drive letter).  With My Book Duo, you only need one USB cable to access both drives.

The chance of failure with JBOD is the same as individual disks.  Some say that you should consider the failure rate of both disks.  But the two disks are independent, and using them in a JBOD configuration is no different than having two external drives instead of one.  If the chance of losing a file from hard drive failure is 1%, then it is still 1% when using JBOD.

I found that the My Book Duo was faster than My Book.  Here are the speeds of the My Book Duo in JBOD, compared to the regular WD My Book.  The top two are sequential, while the bottom two are random.  I did these tests using a USB Type C to Type C cable connected to a USB 3.1 port.

This option trades space for safety.  With RAID-1, the second disk duplicates the first disk.  If either drive fails, you can use the other as backup.  Besides reliability, the other benefit of RAID-1 is that the data can be read from both drives at the same time, therefore the reading speed is theoretically almost double (but see below).  The disadvantage is that your storage capacity is only half of JBOD.

I tested the speed of RAID-1 on My Book Duo and found that it was almost half as slow when reading sequential data, although the write speed was about the same.  The increase in speed appeared to be from random read.

This is the default mode of My Book Duo.  With RAID-0, each file is split between two drives.  As with RAID-1, your drive can read from both drives at the same time, so the reading speed is theoretically almost double (for sequential reading).  Meanwhile, the storage capacity is the same as normal.  If you have two 8TB drives, then when using them in RAID-0, you will have a single 16TB drive with one drive letter. The disadvantage of RAID-0 is that if either or both of the drives fail, you will lose the data in both drives, therefore the chance of failure is almost double.

Here are the speeds of the My Book Duo in RAID-0.  The top two are sequential, while the bottom two are random.

There are many other possible RAID configurations, if you have more than two drives.

Choosing between JBOD, RAID-1, or RAID-0 for My Book Duo is easy.  You don’t even need Disk Management.  Just use the included WD Drive Utilities app.  Select your drive, select RAID management, click on Configuration, choose your option, and click on the Configure button.  That’s it.  Please note that if you change the configuration, you’re reformatting the drive so you need to backup any data in it first.  I decided to use exFAT because I have both Windows and Mac.

WHICH RAID SHOULD YOU USE?

I do a lot of photo editing and video editing, and I couldn’t get a clear answer on this.  At first I tried RAID-0, and usually it seemed faster, although sometimes it was slower.  I found that when I was extracting zip files from within the My Book Duo in RAID-0, it was extremely slow.  Whereas on my usual external drive, expanding that same zip file took only a second or two, it would take a minute or longer on the My Book Duo.

Meanwhile, I was somewhat concerned about reliability too.  Is hard drive failure real?  Yes it has happened to me, a couple of years ago, on a Sandisk SSD drive that I was using as my C: drive on one of my PCs.  One day, my PC couldn’t load it and it took a reboot to be able to read it.  The same thing happened the next day.  The third day it just stopped loading altogether.  And just this week in one of the Facebook groups for 360 cameras, someone posted that their hard drive failed.  So it is uncommon, but it happens.

Because I was ambivalent about the performance gains, I decided to just use JBOD as a decent compromise of speed, safety, and storage capacity (minimax strategy).  If I want speed, I’ll use an external SSD for my working files.

Based on the hardware encryption issue, I think there may be better options, such as a Synology 4-bay NAS drive enclosure ($369 without drives), which can be more flexible, but will be more costly.  However, if you want an affordable external hard drive, My Book Duo is available from Amazon or B&H Photo in several sizes:

Thanks for using these links to support 360 Rumors at no additional cost to you so I can do more tests and reviews.

Insta360 One R Overheating? How to record for OVER 3 HOURS with the “Mad Max Mod”
Universal Insta360 One R camera case + lens cap fits ANY mod (1-inch, 360, 4K, 3D mod) without smearing your lenses
Comment