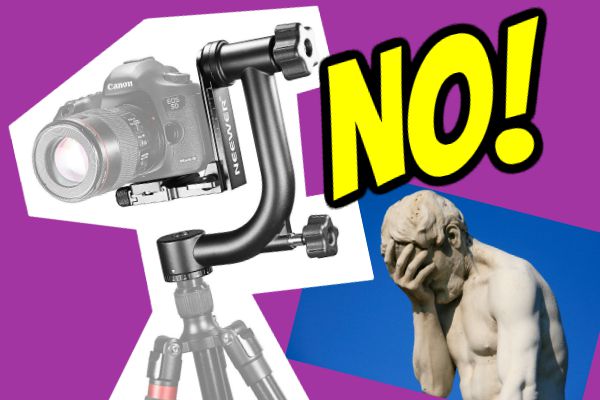 Yesterday, someone told me that they were trying to shoot a 360 photo with their DSLR but that the photo was not spherical, despite shooting 6 photos with a circular fisheye:

Out of curiosity, I wondered how they took their shots. It then became obvious why he couldn’t get a 360 photo: 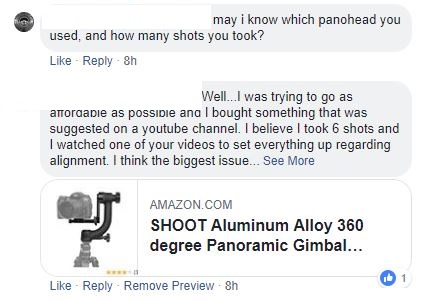 Yup, someone recommended this type of head for taking 360 photos with a DSLR….

Wow.  For those of you who don’t know, this is a gimbal head.  It is designed to support heavier lenses.  It is emphatically NOT designed for shooting spherical panoramas.

I’ve never heard of such bizarre and plainly horrible advice.   No wonder he couldn’t get a fully spherical photo even with 6 shots from a friggin circular fisheye!  And yes someone really is recommending this gimbal head for 360 photos with DSLRs.  I found the YouTube video.  It really is out there.   Unfortunately, in the few months that the video has been there, not one person has commented on the video that the advice is simply wrong.

Here’s the truth: to shoot a spherical 360 photo, you need a panoramic head, either multi-row or single-row.   Panoramic heads are designed to enable you to shoot from the no parallax point aka nodal point.  Please watch my tutorials:


If you want a cheap panoramic head, this one can work.  But from my experience, I get more stitching errors with that than with my Nodal Ninja 3.

There’s a reason Nodal Ninja products have been trusted and respected by 360 shooters for many years.  It’s designed by actual 360 shooters, and the results are repeatable.  FYI, Nodal Ninja is offering free shipping in the US only for July.

Also, even though the Meike is a sharp lens, using it to take 360 photos will give you only about half of the resolution you could get with a better lens.  Here are some camera and lens suggestions.

Take your virtual tour 360 photos to the next level: Everything you want to know about NODAL NINJA (plus: 10% discount code)
DSLR vs. mirrorless, full frame vs. APS-C: which is the best camera for 360 panoramic photos?
Comment