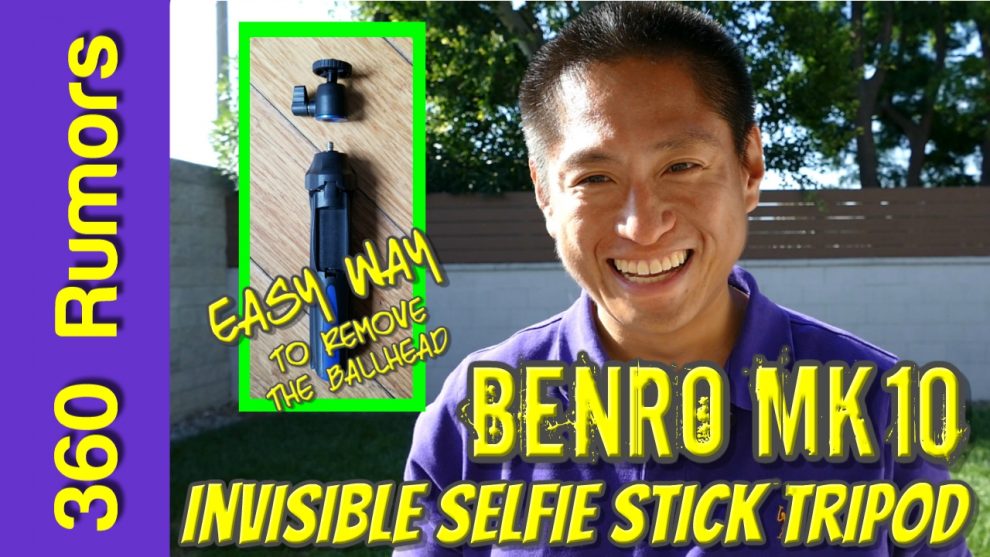 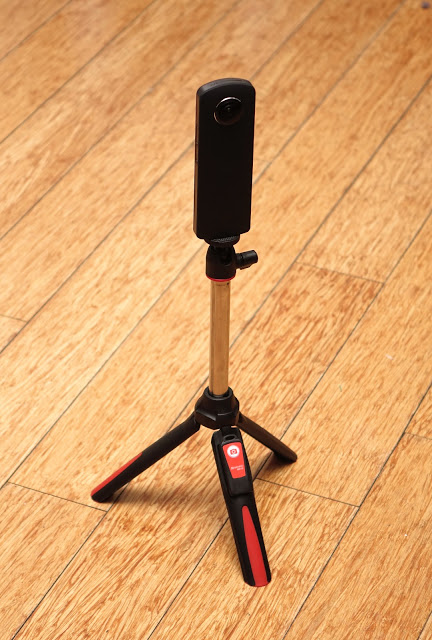 The Benro MK10 is a selfie stick / tripod for small cameras, GoPros and smartphones.  It also works very well for 360 cameras, and is the selfie stick that I use most often.  Here is a review and tutorial for removing the ballhead.

BACKGROUND
Selfie sticks are often derided by photographers and videographers, but they are essential for handheld 360 camera photos or videos.  Without a selfie stick, your hand holding the camera will look gigantic.  A selfie stick allows you to move your hand farther away from the camera, which will make it look more proportional.

BENRO MK10
The Benro MK10 (aka Benro BK10) is a selfie stick by Benro, a company that makes prosumer-grade tripods and other supports for photo and video. 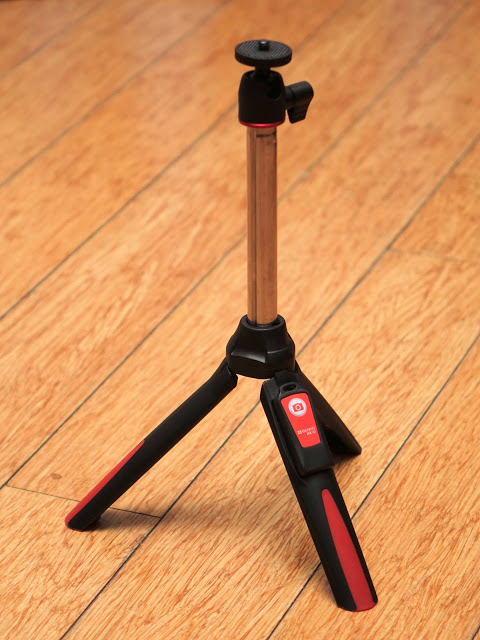 The MK10 is similar to other selfie sticks except that its handle can convert to tripod legs, which makes them even more useful for 360 cameras.  360 cameras capture everything around them, including the photographer.  Shooters who prefer to stay out of the shot can use a selfie stick tripod to take a photo or video without being in the shot. 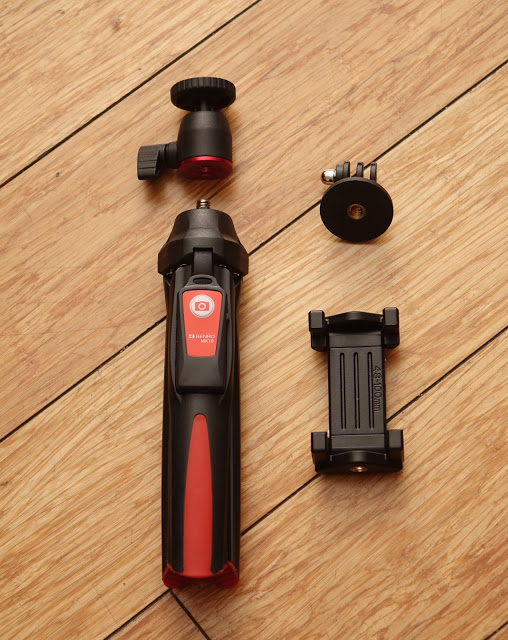 SIZE AND BUILD QUALITY
The MK10 is about 8 inches from tip to tip, including the ballhead.  Without the ballhead, it’s about 7 inches. 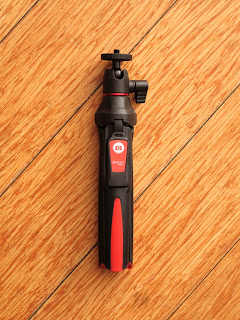 It is the most compact selfie stick I have.  I can insert it in my front jeans pocket or coat pocket.  Here it is, next to other selfie sticks. From left to right:
– Benro MK-10 (“BMK”)
– Nikon Keymission extension arm (“NKM”)
– Kodax Pixpro selfie stick for the SP360 (“KP”)
– generic selfie stick
– XSories selfie stick (“XS”)
– iKross selfie stick tripod (“iK”). 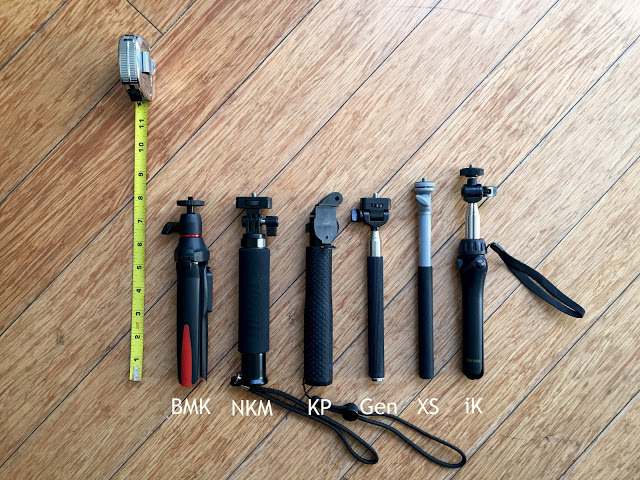 When fully extended, the MK10 is about 36 inches from tip to tip.

The MK10 feels very solid compared to other selfie sticks I’ve owned.  The MK made mostly of thick polycarbonate plastic, similar to the type used in DSLR bodies, and is noticeably heavier than my other selfie sticks.  The weight is not uncomfortable.  On the contrary, it makes it feel more stable.

However, the build quality is not perfect.  When I first extended it, the ballhead came off.  I found that the 1/4-20 insert for the ballhead to attach to the shaft wasn’t glued to the shaft, so I had to put superglue on it (now it’s fine).

I also noticed that the shaft had sharp edges on its segments – something that I did not expect from a Benro product: 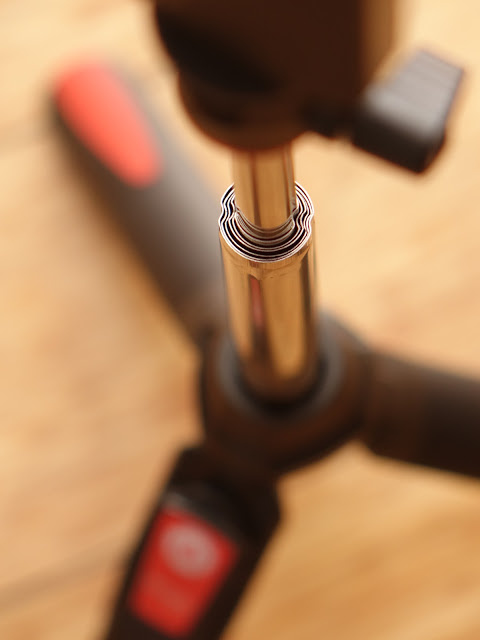 I don’t know if it’s supposed to be like that or I somehow got a copy that was not quite finished.  However, overall, the build quality is still above average.

FEATURES AND PERFORMANCE
Profile:  Here is how the MK10 looks in a 360 photo with a Ricoh Theta S (note: I didn’t fully extend it in this shot).  As with most selfie sticks, it can be invisible to a 360 camera, if you can remove the ballhead (see below).

Ergonomics:
I like that the handle feels substantial, similar to the that of the Nikon “extension arm” for the Keymission and the Kodak Pixpro selfie stick for the SP360.   Some selfie sticks are thin, which forces me to hold them tightly.  Putting it in concrete terms, my generic selfie stick has a circumference of 6cm, my Pixpro selfie stick is 10cm at its thickest, and the MK10 is 10.5cm.  The thickness of the MK10 makes it more comfortable to hold and feels more secure.

BTW there is a hole for a wrist strap at the base of the shaft.

Shaft flex:
The shaft is stainless steel, similar to most of my other selfie sticks, but it’s thicker than most of the others.  The MK10’s shaft is 6cm in circumference/girth.  By comparison, the XSories selfie stick is 4.5cm in circumference, even though they are both about the same length.  In terms of flex, it is above average compared to my other selfie sticks.  (The stiffest that I have is the Keymission extension arm, but it’s also substantially shorter.)

Stability:
Compared to the iKross selfie stick tripod, it seems a little more stable.  I think this is because of the weight of the handle / legs. 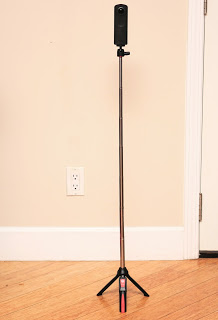 It is noticeably more stable than my Keymission extension arm, which came with a mini tripod with ballhead.  The addition of a ballhead to the Nikon mini tripod improves versatility but sacrifices stability.  First of all, you have to adjust it to make it vertical.  Second, the Nikon ballhead doesn’t have a rigid grip on the extension arm even at its tightest setting, so it’s relatively easy to push it off the adjusted position.

The MK10 doesn’t suffer from any of those problems with the Keymission extension arm.  On the other hand, it is less adaptable to inclined surfaces.

But please note this is intended for indoor use.  A selfie stick tripod outdoors can be blown by a breeze.  If you want a tripod for outdoor use, I suggest a light stand.

Removable ballhead:
One thing I like from the Benro MK-10 is its ballhead, which is removable.  In fact, it’s the only pocketable selfie stick that I have with a removable ballhead.  With all others, the tripod attachment is not removable.

This has a couple of benefits.  First you can substitute a better quality ballhead.  Second, if you have other accessories like a GoPro adapter, you can attach them directly to the shaft instead of to the ballhead (adding more components will decrease stability).  Third, if the ground is level, then I can remove the ballhead and mount the 360 camera directly to the shaft.  Besides making it more stable, it can easily ensure that the camera is level, instead of me fiddling around with the ballhead, looking at it from all sides to make sure the camera is level with the horizon.

How to remove the Benro MK10 ballhead easily

There is a trick to removing the ballhead more easily: dip it in hot water.  This will dissolve the glue.  Here is a video tutorial / demo.

Here is a new tutorial:

Ballhead performance:
As I mentioned, Benro is a tripod company, and the MK-10’s ballhead is the best one among the selfie sticks I have.  Sure, it is only made of plastic but it is very solid when tightened.  It can hold heavy cameras such as the SP360 4k Dual Pro horizontally.  However, if you shake it, it will eventually start to drift down.  (Again, here’s where the removable ballhead comes in — you can use a better quality ballhead — something that you can’t do with the other selfie sticks.)

The ballhead can rotate when I loosen it.  This can help me position the camera exactly how I want, such as positioning the handle along the stitch line for less visibility.

Unlike some selfie sticks, the Bluetooth remote is removable, which makes the MK-10 usable in bad weather. 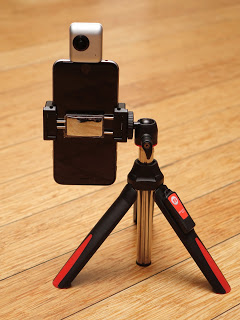 CONCLUSION
Here is a summary of the pros and cons of the Benro MK-10:

Disadvantages:
– hard to remove the ballhead.  Some users may be unable to remove the ballhead.
– had to glue the 1/4-20 attachment on my copy; sharp edges on the shaft.
– costs more than some selfie sticks
– no solid black version. The color of the legs makes it more conspicuous in the 360 shot.  (You can tape over it.)
– not as tall as the iKross.

I hope you found this review helpful. If you would like to buy the Benro MK-10 I would appreciate it if you purchase it from Amazon, which will support 360 Rumors at no cost to you and will enable me to do more tests and reviews.  Thank you very much!