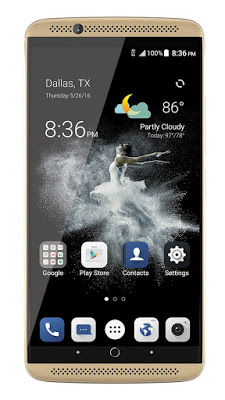 ​
As reported by Mike Cane, the Daydream-ready ZTE Axon 7 is now available for preorder in the US from Amazon, Best Buy and B&H Photo.  Check out Mike’s post here.  The price is $399.99 (64GB; unlocked), and will ship around July 27.
The specs are pretty impressive:
It also features a fingerprint reader below the rear camera, which allows you to unlock the phone with one hand.
The specs appear very similar to those of the Samsung Galaxy S7 ($799), and even the same processor in US versions of the S7.
Some questions arise:
1.  What about ZTE’s Daydream VR headset?  How much is it?  Will headsets be cross-compatible, or only compatible with a manufacturer’s own phone?
2.  If the Axon 7 is Daydream-ready and the specs are almost the same as those of the S7, does that mean the S7 is also Daydream-ready (notwithstanding Google’s statement that existing smartphones are unlikely to be ‘retroactively’ Daydream-ready)?
3.  Similarly, if the S7 seems to be Daydream-ready, it seems even more likely that the S8 will be Daydream-ready, particularly because Samsung is a Daydream partner.
4.  Does this increase the likelihood that the next Samsung Gear VR will be modified to be compatible with Daydream?
5.  What about Apple?  Will they introduce their VR system together with the iPhone 7 (expected to be announced in September 2016)?
I think the ZTE Axon 7 features are attractive and the price is reasonable, but I’m going to wait for the Samsung Galaxy S8 and iPhone 7 announcements.