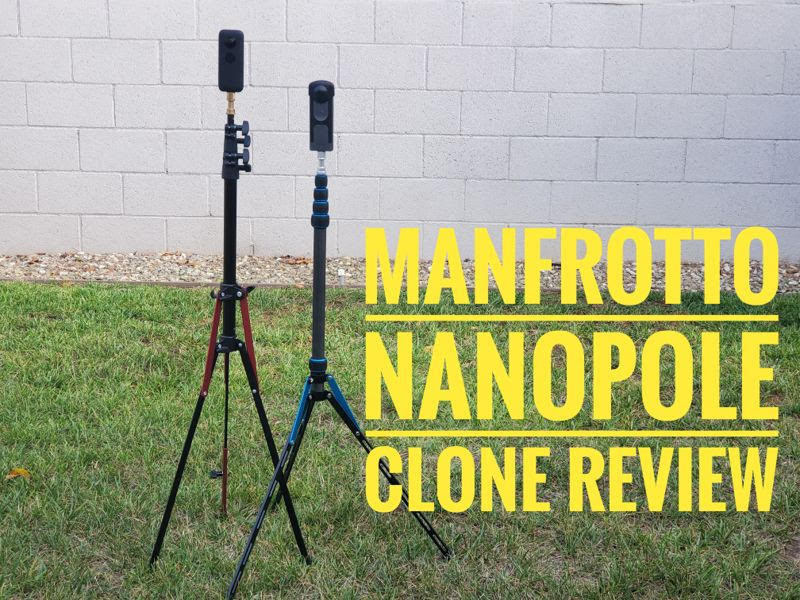 How would you like a stable, nearly invisible lightweight stand with a removable center column that can convert to a monopod?  Here’s a review of the Fosoto carbon fiber stand, which appears to be designed to compete with the Manfrotto Nanopole Carbon Fiber.

Stands are essential to 360 cameras not only when shooting stationary photos, but also to create the invisible flying camera effect. Unlike selfie sticks or monopods, lightstands have built-in tripods that are designed to be wide enough to support the light stand even when fully extended, making them generally more stable than monopods of similar size.

The stand has 5 sections and uses twist locks which appear invisible to 360 cameras.  In addition, they can be locked or unlocked simultaneously, unlike the original Nanopole’s knobs that had to be loosened and tightened one by one.  The Fosoto’s legs are also low profile and appear very thin in the nadir of a 360 photo.

As I mentioned, one of its features is that the center column is removable and can be used as a monopod.  You simply have to unscrew it from the base.  The monopod is quite long at around 6.3 ft (193 cm). The Nanopole’s column is about the same length, but is twice as heavy.   I haven’t tried the Nanopole Carbon Fiber, but I expect its center column to weigh about the same as that of the Fosoto.

Unlike the Nanopoles, the Fosoto’s monopod has a 3/8 tripod hole at the bottom which means it can be used with other stands.  The Fosoto features a spring-loaded hook at its base for hanging a sandbag or other weight.  The Nanopoles also have a hook, but it is on side of the base.

SHOULD YOU BUY IT?

I’m pleased with the Fosoto and it performs pretty much as advertised.  However, the Nanopole’s leveling leg, the wider range of adjustment for its legs, the ability to rotate it without moving the stand are very useful to me, and on the whole, I find that they are more important than the convenience of the twist locks or the weight savings.  If your budget allows, the Nanopole Carbon Fiber appears to combine the best of both the Fosoto and Nanopole.  Meanwhile if you want to see other selfie sticks and monopods, check out this selfie stick and monopod buying guide.

Insta360 One R Rear Lens Cap in stock! Hands-on review and why they’re must-haves
Insta360 One R Overheating? How to record for OVER 3 HOURS with the “Mad Max Mod”
Comment