Happy Lunar New Year!  It’s the Year of the Rooster!  Here in Los Angeles, there will be a Golden Dragon Parade next week on February 4, and I will be going there to livestream it in 360 via Twitter / Periscope, and the Insta360 Nano.  I’ll post the time as we get closer to the event.

As you can see, Nolo VR’s system was able to keep track of the player’s position even when the player was crouching, which demonstrates Nolo VR’s positional tracking capability. 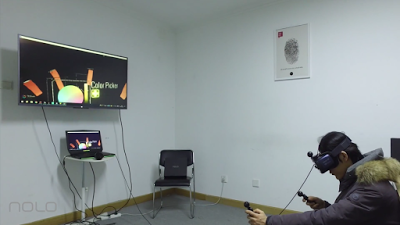 The video also shows how Nolo VR can enable mobile VR headsets to be connected to a PC to run games on Steam VR for the HTC Vive.

Nolo VR will be launching on Kickstarter on January 31 for $99.  (If you’re interested in Nolo VR, check on January 30 as well, because that was the original date and they might change the launch back to the 30th).