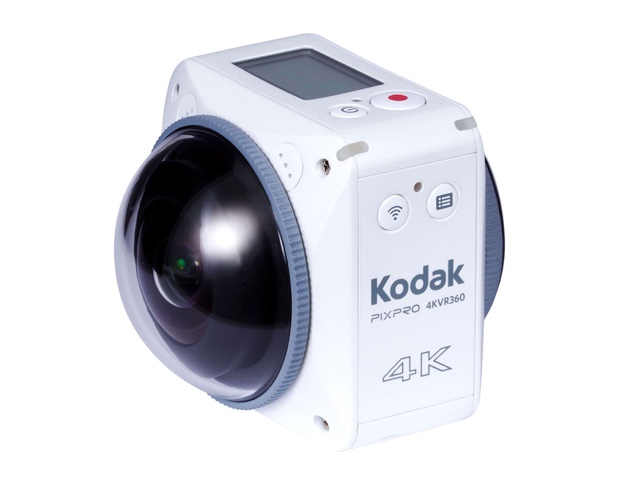 Kodak Pixpro is adding a new 360 camera to its product line. Called 4KVR360, it is a fully spherical 360 camera that uses two different lenses. One lens has a 235 degree field of view, while the other lens has a 155 field of view. Each lens is paired with a 20-megapixel BSI (backside illuminated) CMOS sensor.
Update: the 4kVR360 has been renamed to the Orbit360.  Here is a preview from CES 2017.
The unusual design enables the 4KVR360 to capture either a fully spherical 360 image or a 155-degree ultra wide angle image.  On the other hand, it might lead to different image quality on each side of the photo or video.
The 4KVR360 can capture 27mp photos and, as the name suggests, 4k videos. The 4KVR360 can stitch in-camera at a reduced resolution. To get the full resolution, you’ll need to use its included desktop software.
The 4KVR360 is expected to be available early 2017, at around $500.
Thanks to Michael Mtnez Svq and Richard Wildman for bringing this to my attention!