Here is a hands-on review of the Yi 360 VR with the key specifications, features, tutorial, sample 5.7K 360 videos, links for software, and other information.  I also compare the Yi 360 VR briefly with other popular 360 cameras including the Garmin Virb 360, Insta360 ONE, Ricoh Theta V, Xiaomi Mijia Mi Sphere, and 2017 Samsung Gear 360.   Note: this page will be continuously updated so pls. boomark it.  Changelog at the end.  Most recent update: 7/24/18

In March 2017, I posted about a rumor from a Yi insider about two game-changing announcements on April 24.  Yi did not disappoint 😀

At that time, I surmised that the two announcements would be Yi’s Google Jump rig and a 360 camera.  It turns out that those predictions were spot-on.  At NAB Show 2017, Yi made two 360-related announcements: the Yi 360 VR and their version of the Google Jump rig called the Halo (which I’ll cover in a separate post). 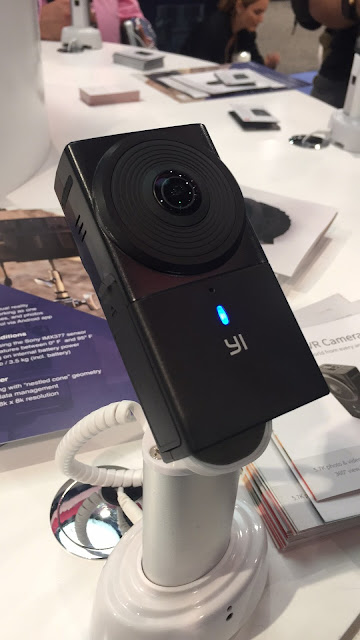 Here are the key specs and features:

Here is my interview about the Yi 360 VR with Yi’s Marketing Director at NAB Show 2017:


The camera is a little taller than a deck of cards and seems like it could be pocketable with the right kind of case.  I tried using it briefly and it seemed easy and intuitive to use with a backlit LCD display, and the shutter button and up and down arrows to navigate.

Besides live streaming, special functions include time lapse mode with intervals of 0.5 seconds to 60 seconds.

According to Yi’s representatives, the camera can record for “hours” without overheating (limited by the battery life and the storage).  It can also supposedly live stream for one hour.  Yi’s representatives said the app will be on iOS and Android.  The specs say PC is supported, without mention of Mac (although the videos can be stitched on a phone).

On paper, the Yi does look amazing.  But what ultimately matters is of course image quality, and that’s actually the headline feature of the Yi 360 VR.  Here is a sample 5.7K 360 video with an analysis of the Yi 360 VR’s image quality and a comparison with other popular 360 cameras:

Photo quality: For photos, the Yi 360 VR is competent but not impressive. The photo quality comparable to the Ricoh Theta V. It does have much better flare resistance and less chromatic aberration, but the Theta V looks sharper. Theta V also has better in-camera stitching and has built-in HDR. Here is a screenshot from my comparison tool.

In desktop app 1.0.3, Yi enabled exporting of stabilized videos.   You simply have to check a box to enable stabilization.  Please note the desktop app is Windows only. For Mac users, Yi recommends Mistika VR (tutorial here).  Here is a sample I shot with image stabilization.


To summarize, as of May 2018, it has the second best video quality among the more than forty consumer 360 cameras I own (second only to the GoPro Fusion).  Here’s why:
– The Yi 360 VR has very high detail.  Compared to a 4K 360 video, it looks more crisp.  You can see small details not visible in 360 videos from a 4K camera, like the thread pattern on my collar in the screen grab above (note that it’s only a screengrab from YouTube so it’s not even the original quality).
– Excellent edge-to-edge consistency in sharpness. There is no drop in sharpness even near the stitch line (with other cameras, most notoriously the Keymission 360, the sharpness drops as you move closer to the stitch line).
– Dynamic range:  can cope with backlighting and difficult lighting situations.  But the dynamic range is nowhere as good as GoPro Fusion or Insta360 One.
– No chromatic aberration or purple fringing.
– Excellent flare resistance with no reduction in contrast, but a few flare artifacts.  In my comparison against competing 360 cameras, the Yi 360 VR had the best flare resistance.
– Excellent consistency between exposure and color of the two lenses, even when one lens is facing a strong light source (with some cameras, you can see a difference in exposure or color between the lenses, usually most noticeable at the zenith).
– Stabilization is also excellent.

Regarding stitching, the Yi 360 VR can stitch videos in-camera automatically but the stitching is template-based and looks poor.  However,  if I use the optical flow stitching from the supplied desktop software, the stitching looks seamless, even for challenging scenery such as repeating backgrounds.   It is also possible to stitch on a desktop with template-based stitching for faster stitching.

Here is another sample video from the Yi 360 VR by InfinitelyFinite, in overcapture style:


As with my sample video, the sample shows very high level of detail and edge-to-edge sharpness.  The images are completely free of chromatic aberration or purple fringing.  The dynamic range looks pretty good. The stabilization is also very good.

– iOS App:  from the App Store,
– Android app: from the Google Play Store.
– The desktop stitching app is for Windows only at the moment.  If that link doesn’t work, here is a mirror. For Mac, you can use third party stitching software.

Here is a tutorial by CreatorUp’s Hugh Hou (he is using the iOS version):


As you can see, using the app is pretty straightforward.  One note is that when establishing a wireless connection to the camera in the Android version, you can do it directly from the app, by simply tapping on the + button on the main screen (you don’t have to manually switch Wi-Fi networks). BTW, the default password is 123456789.

Other controls include:
– voice control (to take a photo, record a video, or turn off the camera).  However, the voice control is not always reliable.  I sometimes have to say the command a few times, especially in noisy environments.
– specifying the ISO for photos (100 to 800) or videos (400 to 6400), and exposure compensation (+/- 2EV in half stop increments).
– changing the scene mode (auto, stage, or night).  Stage is for brighter conditions, and night is for dark conditions.
– controlling the exposure metering mode (center, spot, or average)
– changing the stitching distance (selfie, indoor or outdoor)
– a function for removing yourself from the photo.  You tap a person icon beside the shutter.   It will take 3 shots, 5 seconds in between, and you move to different positions for each shot (do not overlap the positions).  It will create a composite that removes you from the background based on the differences between those 3 shots, similar to an app for the Theta called Vanish360.   This is handy if you don’t want to be in the shot and there’s nowhere to hide.

In-camera stitching is template based and is in realtime, but limited to 4K.  If you choose not to stitch in-camera, you’ll get a double fisheye file (interestingly, it is portrait not landscape orientation).  The desktop app can stitch with a template (for faster stitching) or with optical flow (for seamless stitching at various distances).  The desktop app can batch stitch photos and videos, which is a tremendous timesaver for your workflow.

The issue with the Yi 360 VR’s workflow is that it takes a very long time to stitch videos.  Part of this is because it doesn’t seem to use your graphics card (if you have one).  Among the stitching software I’ve tried, it’s the slowest.

Because the videos are unstitched in the camera, they can be stitched using third party software such as Mistika.  In fact, Mistika has a template for Yi 360 VR.  Third party software will allow customized stitching for difficult stitching situations such as when objects are in close proximity to the camera and are within the stitch line.

In firmware 1.1.41, Yi added support for external microphones.  The microphone would have to be plugged to a USB Type C to stereo adapter.  The external microphone support is very useful for live streaming, when an external recording device is generally not an option.   The Yi 360 VR becomes one of only a small handful of consumer 360 cameras with external mic support (the others include Insta360 4K, Kodak Orbit360, and Ricoh Theta V).

I tried a couple of USB Type C to stereo adapters, and the only one I found that worked is Yi’s own adapter, which is fortunately reasonably priced. Note also that the microphone must be TRS. If it is TRRS then you will need a TRRS to TRS adapter.

In summary, the Yi 360 VR is the most affordable 360 camera for high resolution 5.7K 360 video.  Despite its affordability, it offers amazing video quality with nearly flawless optics, excellent detail and dynamic range.  It has since been surpassed for video quality by the GoPro Fusion, but the Fusion costs more and for all intents and purposes requires a dedicated graphics card, so Yi 360 VR is more affordable.  For photos, the Yi 360 VR is competent but not impressive.

+ In-camera stitching is poor but desktop stitching is excellent, except for very near objects, where there will be warping.
+ Its wireless connectivity to the app is the most reliable I’ve seen.  It’s always worked for me, and has connected very quickly without the need to enter a password.  I turn on the camera, turn on the app, tap the + button and within seconds it’s connected.

o Dynamic range is not as good as some cameras such as Fusion and Insta360 One.  Dynamic range is comparable to Garmin Virb 360.
o Stabilization generally works but sometime doesn’t. When it works, it works *very* well. It seems to have something to do with stitching settings. Still experimenting.
– Yi 360 VR does not have a Mac stitcher unless you use third party software such as Mistika. I don’t expect a native Mac stitcher ever.
– Stitching is very slow, even on a high-end PC. It seems that it doesn’t utilize the GPU very well either, so even a high end GPU doesn’t speed it up.
– This camera is NOT rugged, despite being called an action camera. It is not waterproof, has no native waterproof housing, and it appears that it can die if subjected to sufficient shock (even if the camera appears intact).
– The voice control seems not the most reliable, for my voice and accent.

If you are looking for an affordable 360 camera with high quality 360 video, this is it.  If your priority is 360 photos, it’s ok but there are better options.  The Yi 360 VR is now in stock on Amazon.  You can also try B&H Photo here (not yet in stock).  Here is a new Facebook group for those interested in the Yi 360 VR — I’ll be posting info about the Yi360VR there.