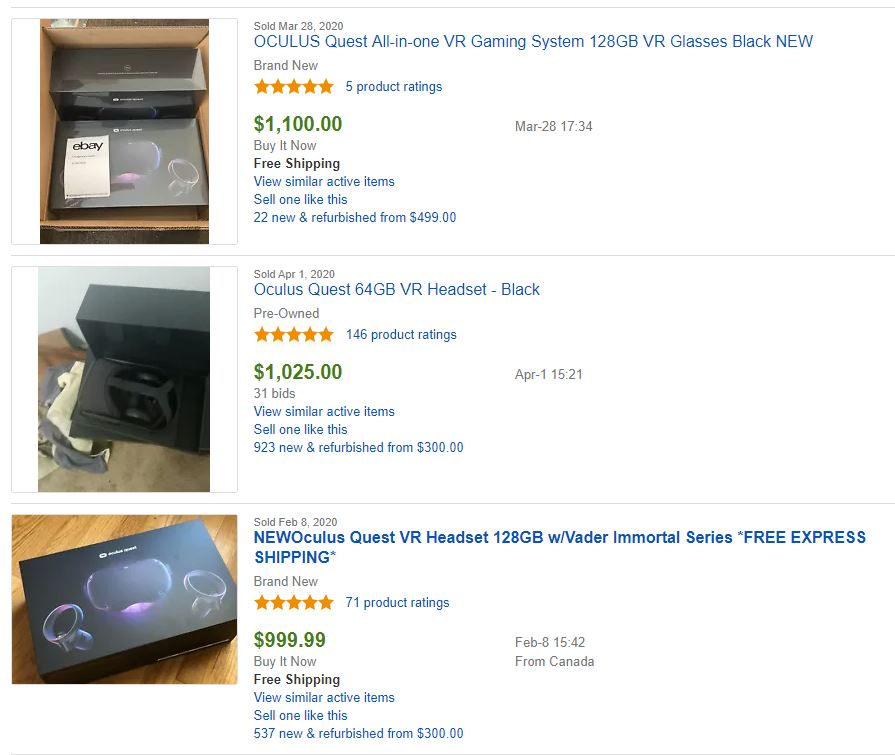 The headline sounds like an April Fool’s joke.  But you can search eBay yourself to see that Oculus Quest headsets have been purchased for over $1,000.  These are not just listings, but items that have successfully sold.  Why is the Oculus Quest selling for such exhorbitant amounts and are there alternatives?

Oculus Quest (reviewed here) is an incredibly popular standalone wireless 6DOF VR headset with two 6DOF motion controllers.  Although the graphics are not as good as those of a desktop VR system, the graphics can look quite good and to casual users, some games may even seem identical to their desktop versions.  And it has gotten even better over time, with enhancements such as being able to use it for desktop VR games through Oculus Link, and being able to use your bare hands (with finger tracking) as controllers.  It’s only in the main menu right now, but we’ll eventually see hand tracking support in games as well.

The biggest problem with Oculus Quest has been supply.  Demand suddenly increased around Christmas, until it was sold out everywhere except from scalpers.  The coronavirus pandemic has not appeared to hurt demand.  If anything, there is now even more reason to use VR as a form of entertainment, or even for exercise (a round of Thrill of the Fight is so intense that it raises my pulse to above my maximum).  At the same time, the coronavirus has delayed supplies of more headsets.  The result has been a perfect storm for scalpers, with prices as high as $1,000 for new units.  Even the Oculus Quest’s brethren, the Oculus Rift S and Oculus Rift CV1 are selling at a premium, although with smaller markups.

If you want a VR headset now, are there more affordable alternatives?  You could look into Windows Mixed Reality headsets, which are functionally similar to Oculus Rift S.  Like the Rift S, they use inside-out tracking systems that don’t need external sensors.  They also offer 6DOF motion controllers.  And yes, they can be used to play Oculus Rift games (as well as Steam VR games):

I have the Samsung Odyssey (currently $349) and Lenovo Explorer (currently $379) Windows Mixed Reality headsets and they are functionally comparable to the Oculus Rift S.  Between my two WMR headsets, the Odyssey is far better, with a higher resolution and better ergonomics and comfort.  If you do want to use them for Oculus Rift games, please note you’ll need at least a GTX 1060 or equivalent.