​
There’s an intriguing new 360 camera on the horizon called Orb VR.  It’s still in prototype stage so there’s not a lot of info about it yet, except that it will be a 3D 360-degree camera with on-camera stitching in real time and live streaming capability.  By comparison, the Vuze Camera, which is scheduled for release in October, is a 4k 3D 360 camera, but it requires stitching after capture, and has no live streaming capability.
Here’s a render of the current Orb prototype: 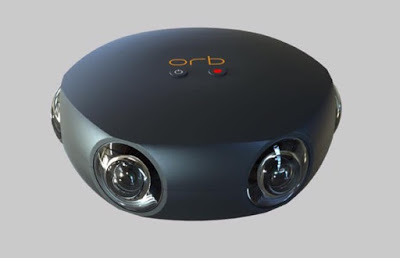 Founder John Ballentine said that it will be a ‘prosumer’ camera and gives an idea of the range of image quality and price that we would expect.  They are planning to have 4k per eye, streaming in realtime.  They’re targeting “the 360heros price range.”
John says the secret to Orb VR’s remarkable in-camera stitching capability is that the stitching is being done by an ASIC (application-specific integrated circuit) – in other words, a processor designed specifically to stitch efficiently “at hundreds of times less power than a GPU rig.”
There’s no established ETA yet, but they are hoping to release it late 2017.  A prototype might be shown at NAB 2017 (April 24-27, 2017).  Here is the official Orb website where you can be on their mailing list.  This will definitely be on my radar.