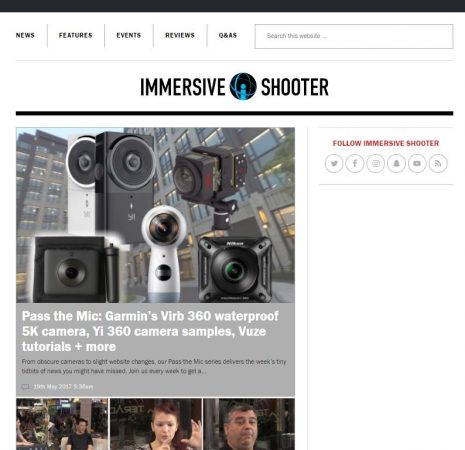 Hi everyone, just wanted to share the exciting news that Immersive Shooter and I are teaming up!
Immersive Shooter is a resource for journalists and creators who create 360 videos and VR content.  They share industry news, gear reviews, interviews with top VR journalists and filmmakers, tutorials and more.  Its editor is Sarah Redohl, an award-winning journalist whom you may recognize as a VR correspondent for NewsShooter, and who has, among other things, presented at TedX, and whose work has been featured on the Washington Post, National Public Radio, and other nationwide media. She has also been recognized as one of Folio: Magazine’s 15 Under 30 young professionals driving media’s next-gen innovation.

I’ll be writing weekly column for Immersive Shooter called “Pass the Mic,” which summarizes the top news in the 360 camera industry.  Here’s my inaugural article!

Check out Immersive Shooter if you haven’t done so.  If you’re a fan of 360 Rumors, I’m sure you’ll find their content interesting as well.

Behind the scenes of 360 Rumors: how it began, how much money it’s made, and more

360 Rumors speaks your language (even for videos)

The growth of 360 cameras and VR in India