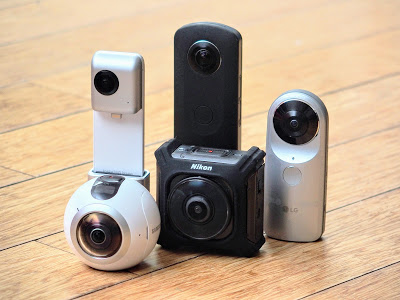 Nikon commissioned Wakefield Research to conduct a survey among 1,000 adults in the U.S. to inquire about their thoughts on using 360 cameras.  Here are the results of the Nikon Life in 360 survey.

RECORDING IN 360
A remarkable 92% wanted to use a 360 camera to record one or more types of personal experiences.
These were the experiences people wanted to record:
60%: vacation and travel
53%: family moments
45%: milestone events
42%: outdoor activities
19%: sports they play
15%: getting intimate.
VIEWING IN 360
An overwhelming majority wanted to watch some types of content in 360.  90% of respondents believed that viewing one or more types of content would be better in 360 degrees.  The types of content people wanted to watch in 360 were:
60%: professional sports
60%: travel content
60%: live entertainment
39%: movies
31%: news and documentaries
30%: TV shows.

Observations:
– The top category appears to be vacation and travel.  60% of respondents wanted to use 360 to record vacation and travel videos, and 60% wanted to view travel content in 360.  This makes sense because a 360 photo or video is ideal for letting you feel like you are at the location.
–  It is interesting that there is a 20% gap between those who want to record in 360 (92%) and those were interested in using 360 cameras (72%).  Perhaps the 20% wanted to limit their use of a 360 camera to a specific type of personal experience and did not consider themselves otherwise interested in using a 360 camera?  Or perhaps they are thinking of having their spouse do the recording? 🙂
–  Overall, the survey results show a very receptive attitude toward 360 cameras.

The survey was conducted among 1,000 nationally representative adults aged 18 or over, between November 15 to 21, 2016.  According to Wakefield Research, “quotas have been set to ensure reliable and accurate representation of the U.S. adult population 18 and older.”
Press release here.