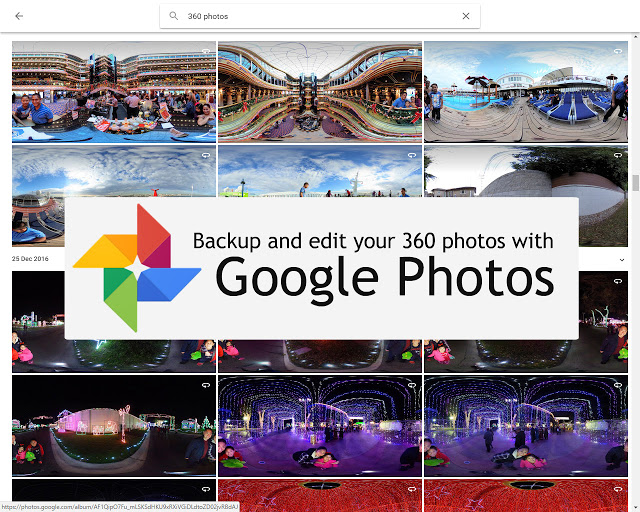 If you have a 360 camera, Google Photos has several features that can help improve your 360 photo workflow, such as backing up your 360 photos automatically and allowing you to make reversible changes to them while preserving the 360 metadata.  And it’s free!

Google is a strong believer in 360 and VR, and they’ve added 360 support to many of their products such as YouTube.  Google Photos is one of their products that supports 360 photos and it has 7 features that make it useful for a 360 photo workflow.  Check out this video:

Here is a larger version of the video.

Google will upload your photos for free, although there will be some compression.  If you want to backup the original files, you can specify that, but uploaded files will count against your Google Drive storage limit.

4.  Tagging and finding photos.  If you add a description to a photo, it will help you find it later among the hundreds of photos that you’ve taken.

5.  View photos in 360 (desktop and Android only).  You can view and browse 360 photos and they will be automatically shown in 360 format instead of the warped equirectangular view.  At this time, there’s strangely no support for Cardboard view yet although I believe you can get a VR view on the Daydream version of the Google Photos app.

6. Nondestructive editing without losing 360 metadata (desktop).  The desktop version of Google Photos works remarkably well for 360 photos.  First, its edits are nondestructive and are completely reversible.

7.  Copy edits and apply them to other photos (desktop).  The edits that you make on any photo can be copied and applied to another photo.  Besides being a convenient timesaver, this feature can help you achieve a consistent ‘look’ for your photos (e.g. similar contrast, saturation, etc.).

Update:  here are more tips about Google Photos from Data2000!

– “Couple of things i can add to this since i have used it for years now
1. Upload a equirectangular photo with out metadata and Google Photos will create the Rotating Pano for you. its from the old #AutoAwesome days of Google Photos.  Since i used to run the original Auto Awesome community.  Autobackup needs to be enabled for this to happen
#2  You can view or download all your backed up photos by typing #autobackup
in the search bar in Google Photos ”
– Google Photos is a subset of the mobile app Snapseed, rebranded for desktop.   Snapseed (Android, iOS) also allows you to edit Photos that are 360 format and preserves the metadata between edits then allows you to backup to Google Photos
–  if you are interested in all the features of Google Photos just type AutoAwsome in a google search Google Photos was a rebranded of this.  See here.

If you found this tutorial helpful, please hit the like or +1 button, and please share it with your friends who are interested in 360 photos.  (BTW I don’t know if you noticed, but this video is also part of a new YouTube channel I created specifically for 360 Rumors.  Please subscribe if you haven’t yet 😀 )Thank you very much!

TECHNIQUE: 6 creative ways to use Instagram’s swipe feature for 360 photos
TECHNIQUE: Nikon Keymission 360 photos and videos looking too dark? Here’s what to do.
Comment