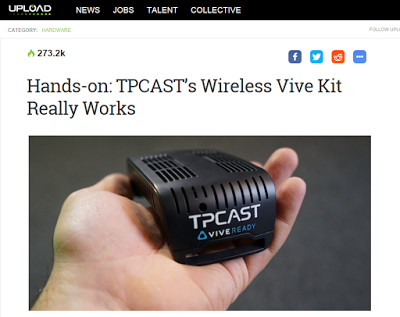 UploadVR got to test the TPCast wireless adapter for the HTC Vive.  After extensive tests, including asking a gymnast to do backflips, they found that the TPCast works as promised, with no noticeable increase in latency.

The TPCast allows you to use the HTC Vive without any cables tethering you to your PC.  This increases immersion by allowing the user to move freely in the virtual environment, without being tangled, tripping over, or otherwise being limited by the headset cables.
There are several companies working on wireless adapters but TPCast is the first one to be commercially available, and it sold out within minutes of becoming available for preorder.  More importantly, TPCast does not add any noticeable latency, an issue that has affected other prototype wireless adapters.
Unfortunately, there has been no confirmation about its availability or price outside of the US, other than to say that it will be available sometime in 2017.
Check out UploadVR’s post!

Put a watermark in your 360 photo instantly and nondestructively with SeekBeak
Facebook and Oculus preview React VR, their cross-platform VR language
Comment