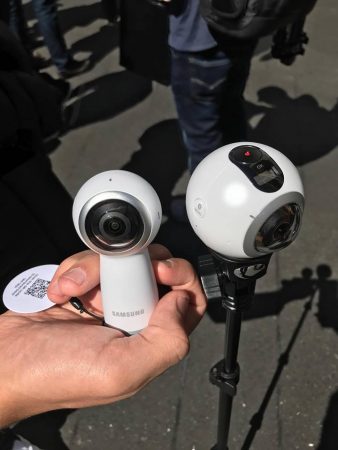 UPDATED!  See below re stitching

1.  Compatibility.
The original Gear 360 was designed only for high-end Samsung phones (Samsung S6 and above).  The new Gear 360 is compatible with a wider range of phones:
– the latest iPhones (iPhone 6S and above, including iPhone SE, running iOS 10)
– some lower-end Samsung phones, including the A5 and A7
– possibly other Android phones (on Android 7.0).

6.  Potentially shorter battery life.
The 2017 Gear 360 has a smaller capacity battery (contrary to what I expected) with only 1160 mAh versus the previous one which had 1350 mAh.

8.  Larger Micro SD card capacity.
256 GB versus 128 GB for the old one.  This complements the longer recording time. 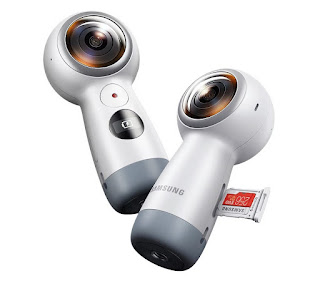 9.  More ergonomic design.
The previous Gear 360 was hard to hold because the lenses covered most of the body.  Any time you held it, you were likely to touch the lenses and put your fingerprints on it.  The 2017 Gear 360 has a built in handle as its body, making it much easier to hold. 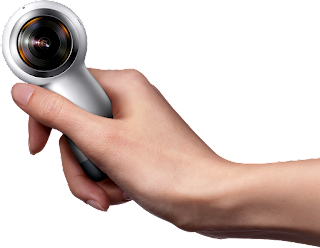 Here is a video showing the new Gear 360:

Other issues:
– HDR:  In the current Gear 360, there is an “HDR” mode but all it does is lift shadows.  It does not take multiple exposures.  The 2017 Gear 360 has both HDR and “Landscape HDR.”   The latter may mean a true multiple exposure HDR mode.
– Price and availability: Samsung has only said that it would be released in the Spring, and did not give a price.  I speculate it will be similar to the current reduced price of the Samsung Gear 360, i.e., $250 to $300.

The official specifications are here.  Thank you very much to Rich for bringing this official specs to my attention.

Special thanks also to Etienne Leroy of V360 for sharing photos and the video of the new Gear 360.  V360 is the first 360 video editing app for Android (and iOS in the future) and enables you to combine several 360 videos into a montage, with background music and other effects (see more info here).  V360 is free to download from the Google Play Store.