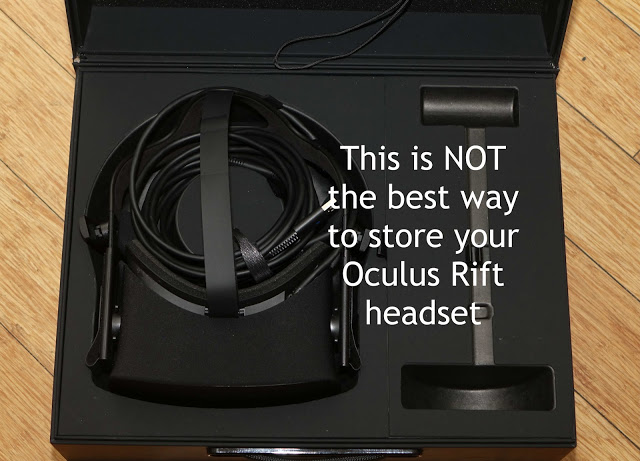 This is how the Oculus Rift headset is normally stored, and there are 3 problems with it, including risking damage to your headset.  There’s another way to store the headset that solves those 3 problems and accommodates the Oculus Touch controllers as well.

PROBLEMS
Here are three problems with storing your headset the conventional way. 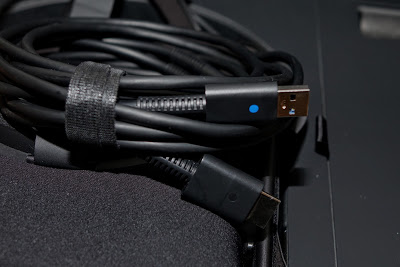 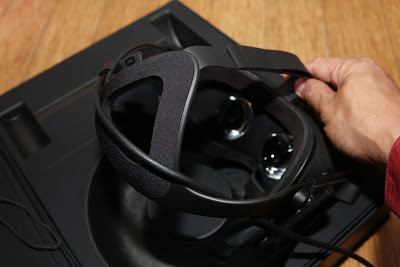 3. When the cable is unwound, it will be twisted, and it won’t lie flat.  Besides being inconvenient, it adds stress to your cable. 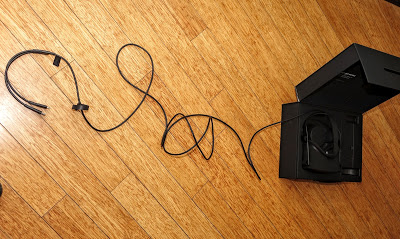 THE SOLUTION
Here’s a video showing a better way to store your Oculus Rift headset:

There are just 3 steps:
1.  Insert the Oculus Rift headset.
2.  Insert the Oculus Touch controllers in the receptacle for the cables.  (*Thanks to u/E1DOLON for that tip!)
3.  Put the cable over the headset in a figure 8 pattern.  With a figure 8 pattern, the twists in the cable will cancel each other out.
–  Tip 1: On the left side of the box, put the loop on the inner side of the headphone. If the loop is on the outer side, it can get caught when the lid closes.
–  Tip 2: The bulky plastic part of the cable (near the USB and HDMI connections on the PC side) should be on the right side of the box, beside the headset.  If it is on the left side of the box, it could make it harder to close the lid.
–  Tip 3: Put the USB and HDMI connectors in the receptacle for the sensor base.  This makes it less likely that it will flop around and scratch your headset.

When you’re ready to use the headset, you’ll find that it’s easier to take out the headset cable, and it won’t be twisted.