One of the hot new releases for the Oculus Rift is a shooter called Damaged Core, a game where you take on the role of a disembodied virus that can take over enemies and use their abilities.  It’s easily one of the best VR games on any system, bar none.  UploadVR gave it a rating of 9.5/10, the highest score it has ever given for any VR game.  It’s one of those games that makes me envious of Oculus Rift’s software library. 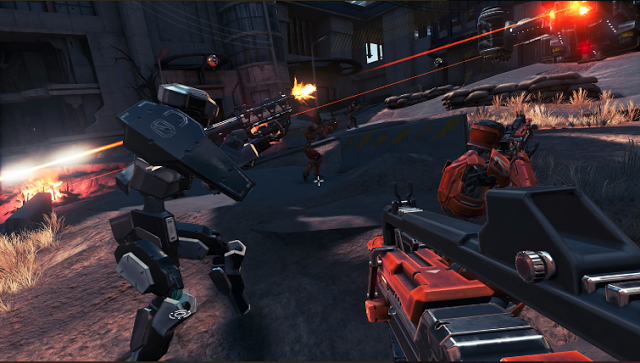 Here’s a video of Damaged Core:

Here is the official page for Damaged Core.

The HTC Vive (reviewed here) can play some Oculus Rift games and apps through Revive.  But it’s hit-or-miss, and if you get software from the Oculus store that turns out to be incompatible, Oculus doesn’t issue any refunds.

I can confirm that Damaged Core can work with HTC Vive through Revive — sort of.  There are two limitations I’ve found so far.

First, you need to disable reprojection, or else there will be a ghost image.  Fortunately, even without reprojection, my system seems to be able to keep up (my system’s HTC Vive VR readiness score is 7.9).

So, how is the game now that I’ve tried it?  I’ve only tried a few minutes of it, but it is indeed an amazing game.   It’s like a shooter but the ‘takeover’ mechanic is an integral part of the combat.  You need to use this special ability relatively frequently.  As for shooting, you aim with your gaze then press the trigger to fire.  It’s not as fun as shooting with motion controls, but it works and I don’t mind it at all.

The graphics, level design, gameplay are all top notch.  Even if it was not in VR it would be an excellent game, in my opinion.  That it is in VR makes it even better.  I don’t normally play shooters, but it’s the best shooter I’ve played in recent memory, and one of the best VR games (if not the best) I have on the HTC Vive or Samsung Gear VR.  Highly recommended.

Google Daydream’s secret weapon is not its headset
OPINION: The fate of the VR industry rests on the success of the Playstation VR
Comment