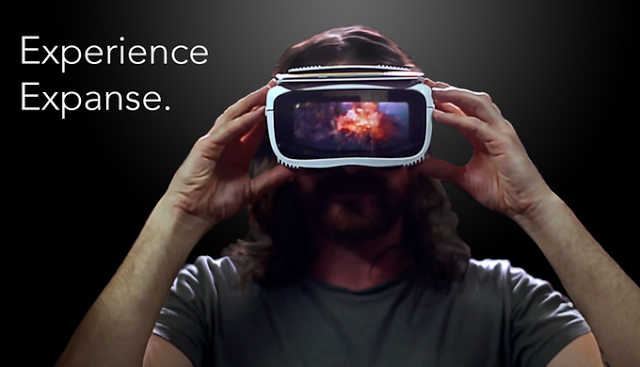 ​
One of the benefits of a VR headset such as the Samsung Gear VR (reviewed here) is being able to watch movies and videos on a giant virtual theater.  The issue with doing that is that the resolution is limited, and one of the complaints against the Gear VR and other VR headsets is the screendoor-effect (SDE), i.e., it looks like you’re watching everything through a screen door or mesh.
Expanse is a headset with a completely different design to address the desire for a high resolution display – as much as 5 times higher than on a VR headset.

VR headsets have a split screen display (either one screen split in half as in the Gear VR or Playstation VR, or literally two smaller screens). The left display is shown to the left eye, and the right display is shown to the right eye.  In addition, there are Fresnel lenses that magnify the images, so that each eye sees a magnified version of half of the display.  Because you’re looking at a closeup view of half of a screen, the resolution appears limited, hence the screendoor effect. 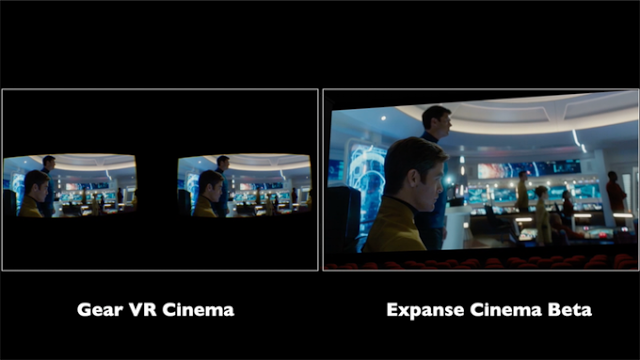 ​
Expanse is a headset for your phone with a different design.  It uses a parabolic mirror to reflect the entire display of your phone to each eye, therefore each eye benefits from the full resolution of your phone.  Moreover, in a VR headset, the virtual theater screen has to be shrunk to fit within the square aspect ratio of the VR display for each eye.  With Expanse, movies can be shown on the 16:9 aspect ratio of your phone’s screen.  Therefore, the creators claim that the resolution on Expanse is effectively as much as 5 times higher than on a standard VR headset. 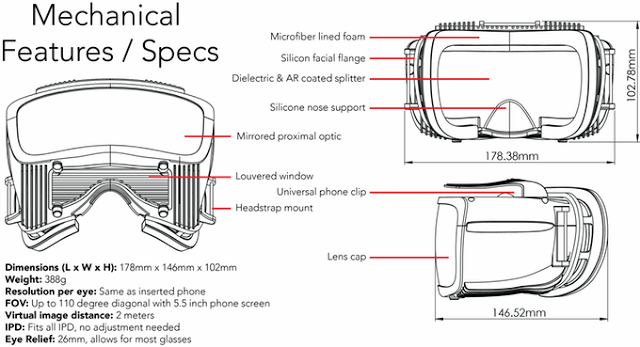 ​
But it’s not just like putting your phone a few inches in front of your face.  Rather, Expanse gives a magnified view, similar to seeing a 200-inch screen from about 6 feet away.
The tradeoff is that the Expanse is 2D only.  The Expanse creators believe this is a fair tradeoff because most people use VR headsets to watch videos instead of playing games.  Moreover, there is not enough VR content, whereas there are a lot of available movies and videos.  The Expanse is therefore more like a personal virtual theater, similar to the Avegant Glyph, than a VR headset.

Here is a video explaining the project:

But does it really work?  Yes, according to UploadVR.  Writer Ian Hamilton tried it out and said, “[I]nside I saw something unlike anything I’ve seen before in VR — a high resolution monoscopic virtual reality home theater.”

Another interesting feature of the Expanse is that the mirror is see-through.  If the lens cover is removed, then the mirror can act as a heads-up display as you look around the real world, similar to AR (but without depth sensing capability).
Expanse is now on Kickstarter with an early bird price of $80, or $90 with the optional gyro-enabled remote control.  It’s not cheap for a passive headset, but then again, it is much cheaper than the Avegant Glyph.