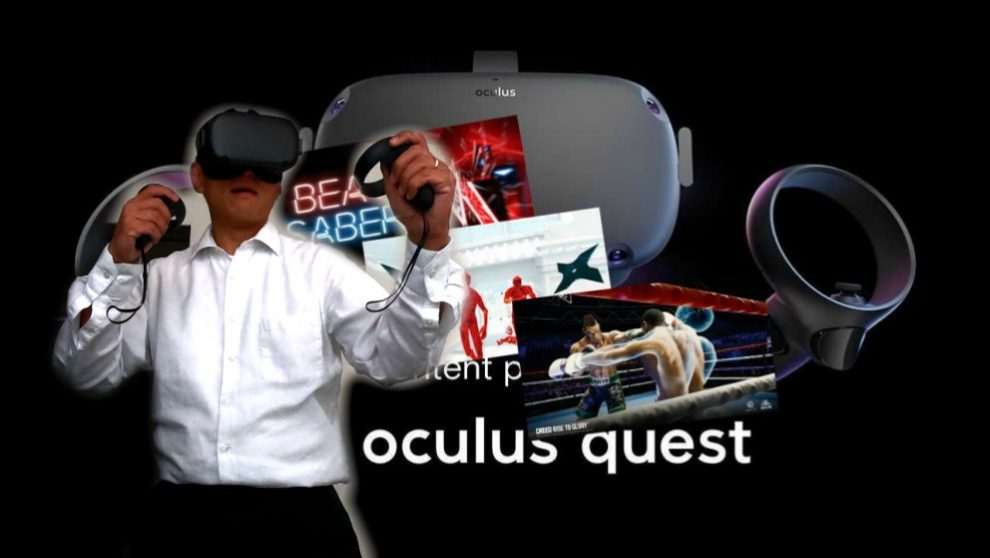 Yes you can use Oculus Quest (reviewed here) to play HTC Vive and Oculus Rift games wirelessly using the free app ALVR (Air Light VR).    In this beginner’s guide, I’ll take you through the process step by step. It’s not difficult but it does take many steps.  Don’t worry, it’s totally worth it!

Can you use Oculus Quest to play desktop VR games?
How well does ALVR work?
How to install ALVR for Oculus Quest
Troubleshooting
Updating, uninstalling, reinstalling

Yes you can with ALVR and a VR-ready PC.  Previously, I showed how you can play HTC Vive and Oculus Rift games on the Quest with RiftCat.  However, as of May 2019, RiftCat has significant lag and is barely usable.  ALVR is a streaming software like RiftCat but its performance is much better.  Here is a demo and tutorial by Sweviver:

How well does ALVR work?  Is it hard to use?

Once installed, ALVR is fairly easy and fast to use.  On Oculus Quest, you launch the ALVR mobile app, and on your desktop you launch the ALVR desktop app.  You click on a button to start streaming, and it launches SteamVR.  The Quest will work wirelessly.

In terms of tracking performance, ALVR is acceptable and is much better than Riftcat.   The latency on my system was around 50 to 60ms.  It was good enough that desktop VR apps were generally usable.  Yes there is noticeable compression (similar to RiftCat) but there was much less lag.  Note: Playing Oculus games will be more demanding on ALVR compared to SteamVR games.  On my laptop with i7-7th gen, 32GB, GTX 1070, there is no judder for SteamVR, while for Oculus games there is a bit of judder.

Thanks to the lower lag, I was able to play Beat Saber for Oculus Rift, although the tracking isn’t great.   With Thrill of the Fight for SteamVR (a boxing simulator), it was somewhat usable, although the tracking was less effective, and as a result, the speed of my punches was not registering as well as on the Rift S.  To be specific, on the Rift S, Thrill of the Fight measured around 64,000 of ‘damage’ from my punches in 1 min. 30 seconds.  With similar effort on the Oculus Quest with ALVR, the game measured only around 40,000 of damage.  Moreover, on the Rift S, my opponent was limited to around 6,000 of damage, whereas on Oculus Quest, I sustained as much as 30,000 damage.  I attribute the differences in both offense and defense from the slight lag in the tracking.

How to install ALVR for Oculus Quest in 5 Steps

Step 0: Install SteamVR to run HTC Vive games and install Oculus for Oculus apps.
– To use SteamVR you’ll need to create a Steam account.  To use Oculus, you’ll need an Oculus account (or use your Facebook account).
– For Oculus, skip the part where it requires you to connect a Rift or Rift S.

Step 1:  Download the ALVR desktop app and the ALVR mobile app.
– Check the official Github page for ALVR  for the latest release, download the setup file (the desktop app) and the apk file (the mobile app).
– For convenience, rename the .apk file to a shorter name such as ALVR.apk

Step 2: Install the desktop app.
– Just run the setup file.
– Connect your PC to the same wireless router that you’ll be using for the Quest.  If possible, use an Ethernet cable to connect the PC to your router.

— Log in to your Oculus account and go to https://dashboard.oculus.com.  On the left column, click on Manage.  On the right side, click on Create New Organization.
— On your Oculus mobile app, go to Settings.
— Select your Quest headset, and below it, click on More Settings.
— Toggle Developer Mode.

– B. Copy ADB (Android Debug Bridge) to your PC.
— If you are not familar with using command prompts, just copy it to a folder under C:\users\yourusername  .  You can move the mobile app (.apk) to this folder as well.

– C. Connect your Quest to your PC via USB.

– D. Install the ALVR mobile app.
— From the command prompt, type adb install filename where filename is the apk file location and name, such as C:\users\mic\ALVR.apk
— After several seconds it will say “Success”.

– E.  You can now disconnect the Quest USB cable from your PC.

Step 5: Launch the desktop app with the recommended settings.

– Run the ALVR desktop app (double click on it).
– On the Server tab, click on Connect.  It should say that your Quest is connected.
– Go to the About tab and click on Install Driver
– Under the Video tab, change Codec to H264, change bitrate to 20mbps, resolution to 150%.
– Under the Sound tab, uncheck Stream sound.
– Click on Start Server
– On the Server tab, make sure total latency is no more than 80ms.  If it is too high, reduce go back to the Video tab and reduce the resolution and/or bitrate.

As an aside, the process you used to install the ALVR mobile app is the same process used for sideloading games from Oculus Go or Gear VR, so now you know how to do that as well.

Crashing: On my system, if I don’t uncheck Stream Sound, ALVR keeps crashing (with ALVR 2.4.0-alpha4).  Try unchecking it.

Missing sensor: On some games such as Mage’s Tale, the game will not proceed because it thinks you don’t have sensors.  Create a fake base station using the ALVR desktop app.  Click on the Other tab and check Fake base station.

How to update, uninstall, or reinstall ALVR

To update ALVR, you’ll need to uninstall previous versions from your Oculus Quest.  To do that, connect the Quest to your PC (see step 3C above).  As with installing ALVR, you’ll need the command prompt.  From the adb directory, type adb uninstall com.polygraphene.alvr  .  BTW you can use this to uninstall other sideloaded apps too.  Just use the filename below the name of the app on the Unknown Sources screen, such as adb uninstall com.riftcat.vridgeoculus.beta.beta .

After uninstalling the previous version of the ALVR mobile app, download and install the new version (Step 1 and Step 3 above).

HP VR Backpack G2 is a wearable VR-Ready PC
Oculus Quest out of stock at Amazon, Walmart, Newegg! Where to buy at MSRP
Comment