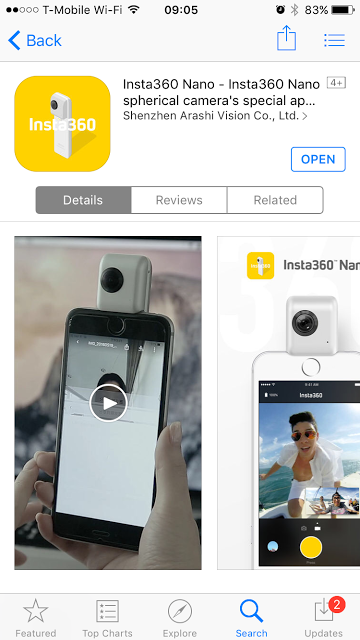 The Insta360 Nano (reviewed here), a 360-degree camera for the iPhone, got a major update to its firmware and its app, adding many capabilities that have been requested by its users:
– self-timer
– exposure compensation
– filters
– white balance control
– a beautifying filter

When I got the Insta360 Nano on its launch day, I liked the image quality for both photos and videos, but lamented some missing features including the lack of a self-timer and tripod adapter.  These are important features for a 360-degree camera because they allow the camera to take a shot without the user’s hand showing prominently in the shot.  There was a partial workaround by using a Bluetooth remote as a trigger but sometimes, a self-timer is more convenient.

Insta360 showed amazing responsiveness, updating its app just a week from release to add a removable logo.  They also promised an update to add a self-timer, and a tripod adapter.  They revealed the tripod adapter the other day, along with several accessories to allow the Nano to be mounted on a variety of surfaces.

Now, they have released the self-timer, and as I hoped, the self-timer can be used even without the app.  Moreover, they introduced other improvements to the Nano:

1. SELF-TIMER
The self-timer works both in the app and when the Nano is used independently.  In the app, there’s a new setting icon (looks like a gear) beside the shutter button: 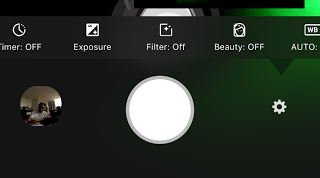 One of the options is the self-timer, which can be changed from 2, 5, or 10 seconds.

3. FILTERS
The update has several filters to change the look of the photos.

4. BEAUTIFYING FILTER
You can apply a filter that is more flattering for subjects.  It will increase the exposure slightly, and decrease clarity to soften the appearance of wrinkles.

5. WHITE BALANCE
You can now change the white balance from Auto, Cloudy, Sunny, Incandescent or Fluorescent

6.  LITTLE PLANET VIDEO EXPORT
The new app allows you to export a video with a little planet perspective.

7. ADDITIONAL WATERMARK OPTIONS
Insta360 added a few more watermark options, including one that darkens the zenith, and your own customizable watermark

I had some difficulty updating the firmware.  When I inserted the nano in my  phone and went to settings, I saw a new option for self-timer settings. It prompted me to update my firmware. However, the firmware wouldn’t update.

I have been having some problems with my internet connection so I disconnected from my wi-fi and just used my cell signal. This time I got a message to download the firmware update to a micro sd card. Here are the steps:
1. Download the firmware from insta360.com. Here is the direct link https://static.insta360.com/software/Nano/iOS/Firmware/1.43_0176/Insta360FW.bin
2. Copy the file to a formatted Micro SD card. If you don’t have a Micro SD card reader, you can plug the Nano with the micro SD card into your USB then copy the file. Remember to eject the Nano before removing it.
3.  Turn off the Nano and remove the Micro SD card.
4. Turn on the Nano and wait for a few seconds.  The LED will be blue then it will start to blink blue.
5.  When the LED blinks, insert the Micro SD with the firmware.
6.  Wait for the Nano to update.  When the LED changes to green, the Nano has been updated.

CONCLUSION
This is a major update for the Nano that improves it significantly.  So much so that I feel it is necessary to revise and upgrade my review.

Thanks again to Daniel Zhu for alerting me to the update!