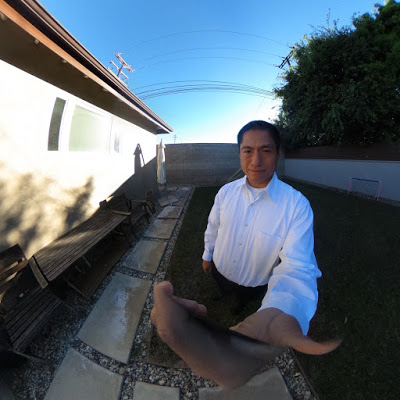 I found an LED lamp that can add light to your 360 photos or videos, and it’s slim enough that it’s pretty much invisible even to a 360 camera.

INTRODUCTION
360 cameras for consumers have small sensors, which do not perform well in low light.  At the same time, there are still no 360 cameras that support electronic flash.  It is possible to add continuous lighting, but because 360 cameras have a spherical field of view, the light source will be captured in the photo or video, and moreover, the light can add glare.

I looked for a light source that was slim enough that it would not be visible in the shot.  Here’s the lamp that I found: 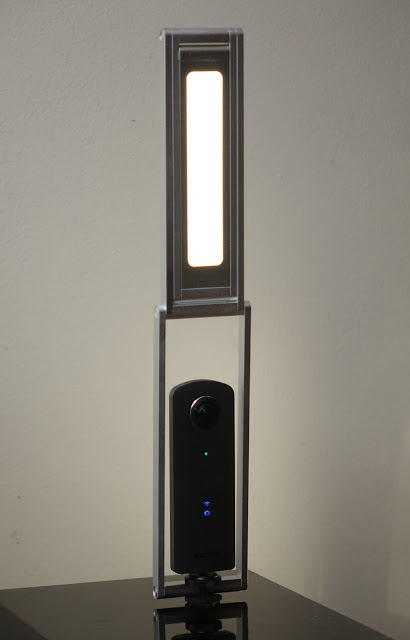 Here’s a sample 360 photo when using with the lamp:

As you can can’t see, the lamp is invisible even to the Ricoh Theta S.  The lamp can also be used for narrower 360 cameras such as the Insta360 Nano (with a tripod adapter) or an LG 360 Cam.

The lamp includes a plastic mounting clip that can also double as a stand, and a Micro USB cable for charging (USB adapter not included). 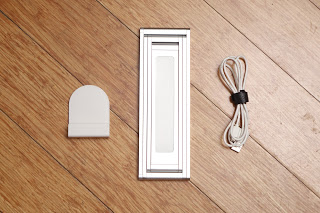 The lamp is about 8 inches long and mostly aluminum.  It can be configured in various positions. 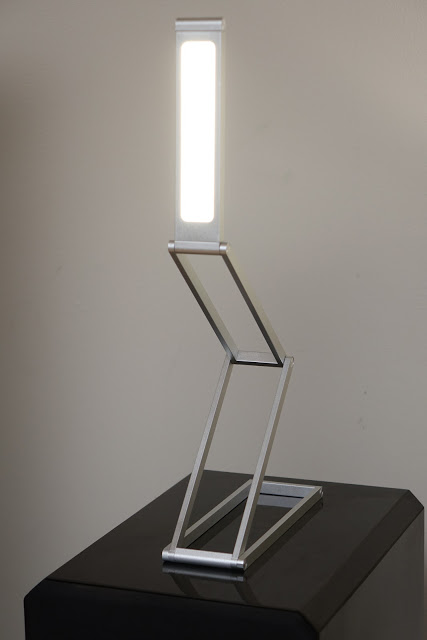 There is a button at the back that turns it on and cycles through 3 levels of power.  The light is a 3-watt LED rated at 120 lumens. 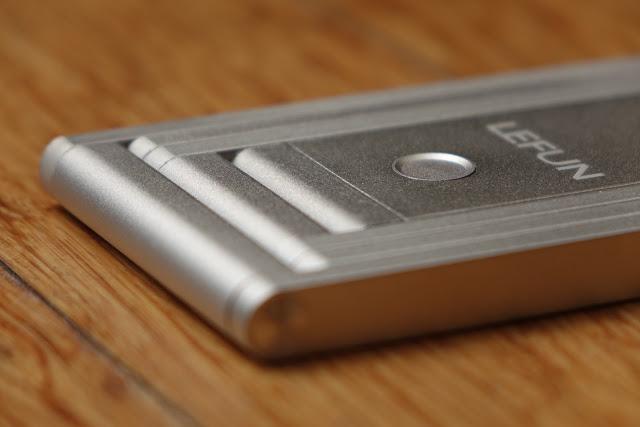 The lamp has a built-in battery and is rechargeable via USB.  While it is charging, a blue light indicates the charging status. It can also be turned on while plugged into a USB charger. 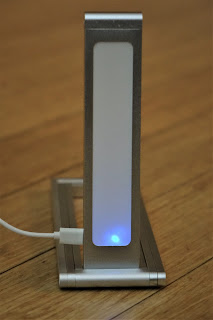 BENEFITS
The lamp improves low light image quality significantly, at least for the portion that is lit.  Here is a sample without the light (notice the noise and grain, and the lower detail and saturation): 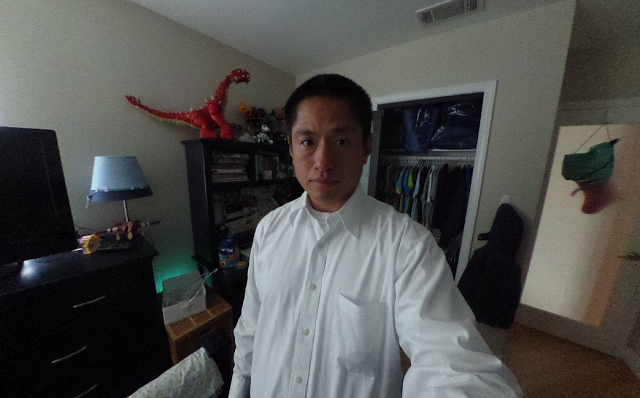 Here is the same shot but with the light (with a medium power level): 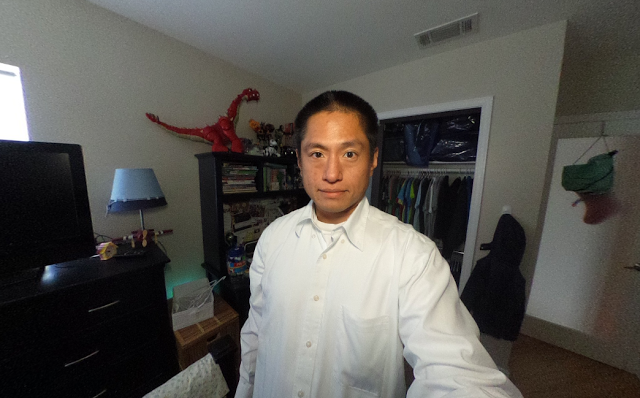 In addition to low light scenes, the light can also be used to help a little bit with backlit scenes when the shooter or subject could otherwise be in shadow.  However, the lamp is not that bright, so it makes only a subtle difference and requires the lamp to be held fairly close (around 1 ft), but it’s still an improvement: 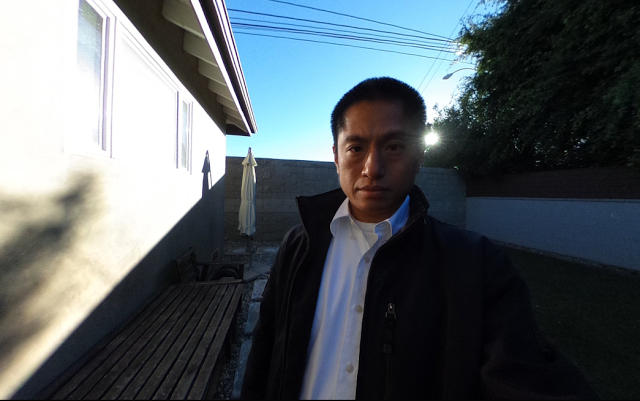 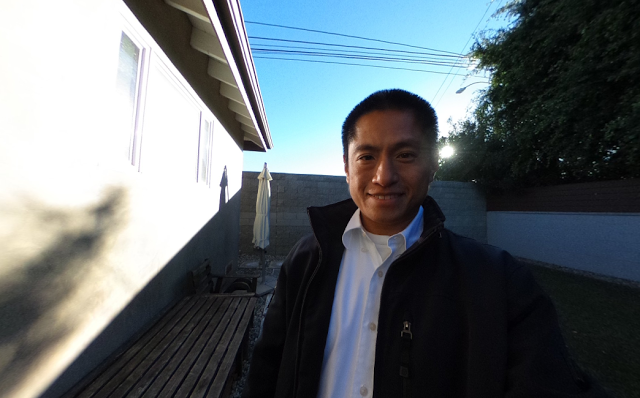 USAGE
The lamp is versatile and can be used in several ways.  First, the lamp can be handheld, with the camera on the bottom frame and the lamp above the camera.  Another way is for the lamp to be positioned as a tabletop stand, as in the photos above.  A third way is for the camera to be positioned high like a selfie stick, with the photographer holding the lamp segment.  This allows the lamp to illuminate the user while the camera is farther from the user’s hands (to avoid looking like you have giant hands).

ATTACHING THE CAMERA
The challenge with using this lamp is finding a good way to mount the camera on it.  Here are some ways I’ve tried, with different advantages and disadvantages. 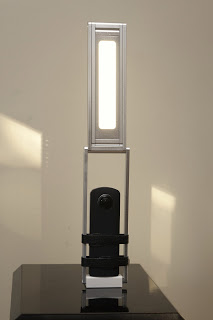 For total invisibility, I simply use velcro straps to keep the camera within the frame of the lamp.  This method is inexpensive and the lamp is totally invisible even to the Ricoh Theta.  The disadvantage is that the camera is not secure at all and could fall out and be damaged. 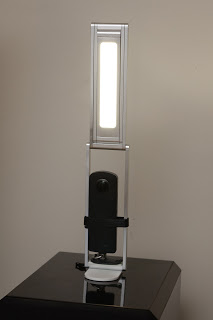 This is similar to the previous method with velcro straps, but to add a little more security, I also use a magnetic Tiltpod (reviewed here). 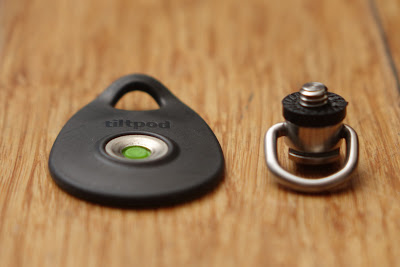 Although the lamp frame is aluminum, the axles of the hinges are metal, and they are enough for the Tiltpod to attach magnetically. 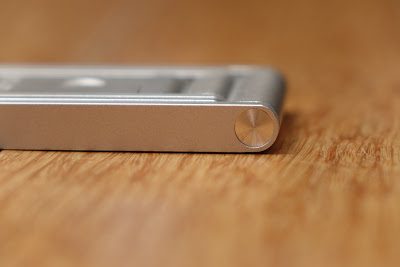 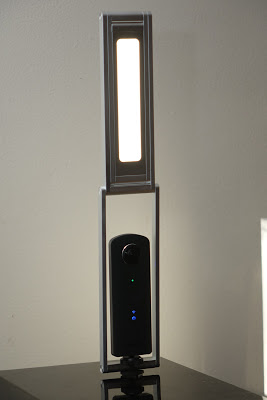 A third way is to attach the camera to the lamp using a hotshoe adapter as a makeshift clamp.  You’ll need:
– a 1-inch hotshoe to 1/4-20 adapter with thumbscrew
– one or two rubber washers with 1/4-20 holes. 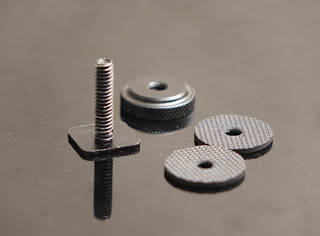 I used the thumbscrew and hotshoe adapter to clamp onto the lamp.  At the same time, the 1/4-20 bolt attaches to the camera. 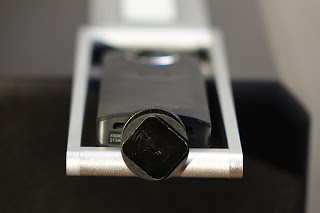 There are a couple of issues with this configuration.  First, the clamp on the frame is not very secure.  Second, the camera protrudes slightly from the frame so the lamp is slightly visible.  Here is a sample 360 photo:

4.  Best security but most visible 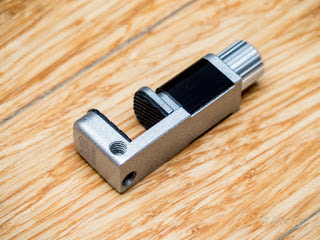 I haven’t tried this last configuration because I don’t have a 1/4-20 male to male adapter handy.  But I ordered one and will try it out.

ATTACHING TO A TRIPOD
Attaching your camera to this lamp and then attaching it to a tripod is not very stable.  The assembly could fall and damage your camera.  However, if you really wanted to, you might be able to use an XSories tripod adapter to attach the lamp to a tripod.

WHERE TO BUY
The lamp is available from Amazon here.  However, it is sold under many brand names and the prices go up and down.  Here are some other similar lamps.