With Lenovo Mirage, you and your family and friends can finally capture and re-live special moments in three dimensional virtual reality.  Here is a hands-on review of the Mirage, the first Google VR180 camera for consumers, with sample photos and videos.  Note that as of May 14, 2018, there are no apps yet for editing VR180 photos or videos.  I’ll update this review when editing software become available.  (May 14, 2018: added more sample photos, including low light sample shots)

You’ve seen thousands of photos and videos from your family and friends, but unless you yourself were there with them, you can only guess what it was like to have been there. Google VR180 cameras promise the ability to capture moments that you can re-live in 3D virtual reality, bringing us closer than ever possible to the experience of being there.  At the same time, by limiting the view to only one stereo pair, VR180 reduces the complexity and cost associated with 3D 360 cameras.

Lenovo Mirage is the first Google VR180 camera for consumers (the other one is the Yi Horizon, which is not due until later in 2018).  In this review, I’ll discuss how to use the Lenovo Mirage, from shooting to sharing. I’ll also provide samples that you can view with a Google Cardboard or other VR headset so you can experience VR180 for yourself.

The battery cover occupies almost the entire back part of the camera.  The battery is charged within the camera by plugging in the camera to a USB power source.  The camera can be used while it is charging. 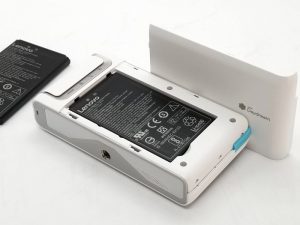 On one side of the camera is a cover for both the Micro SD slot and the USB Type C port.  The Mirage has a built-in memory of 16GB, of which around 10GB can be used to store photos and videos.  I found it a little hard to keep the cover tightly closed when I had a Micro SD card inserted. 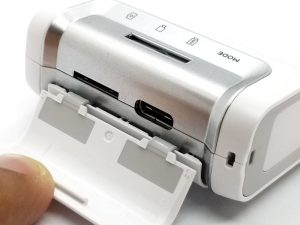 There is a standard 1/4-20 tripod hole in the bottom (thankfully, metal).  There’s a little hole for a wrist strap, although a wrist strap is not included.  The user manual mentions a SIM card slot in the battery compartment although my unit did not have a SIM slot.

Lenovo Mirage Controls; how to shoot 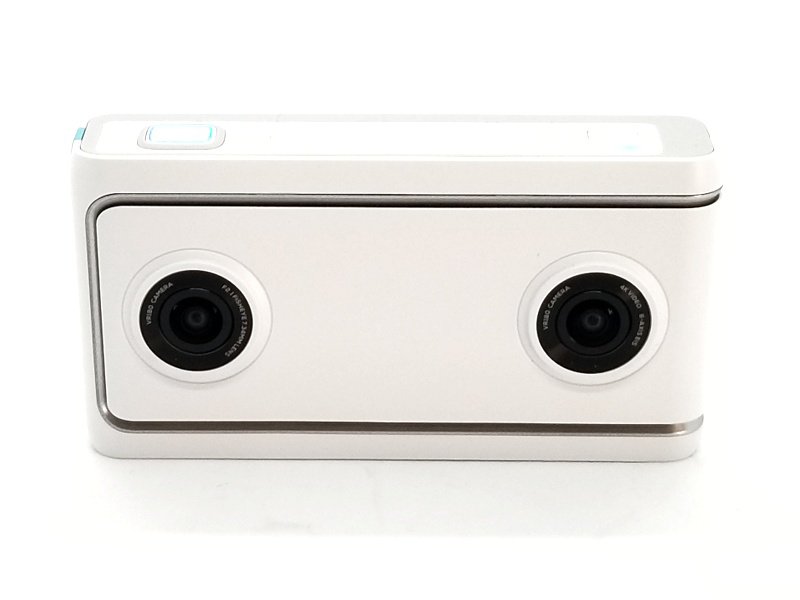 Use the Function button to switch between photo, video, or live (when connected to a Wi-Fi network).  There’s an LED display on the back of the camera to show which mode you’re in.  Use the shutter to take a photo or to start or stop recording. 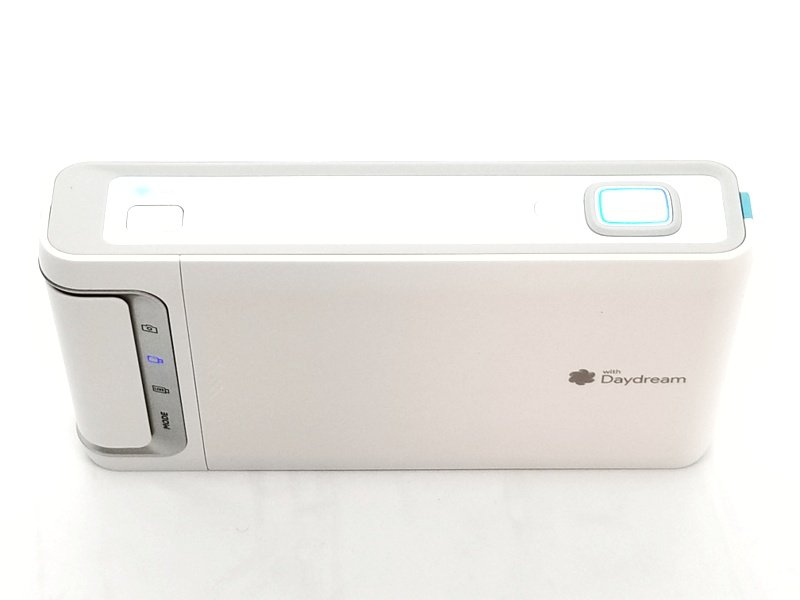 Connecting to a smartphone:

The Lenovo Mirage can connect to either an iOS or Android phone (check for compatibility).  Connecting is pretty easy.  After installing and running the app, just turn on the camera.  The app will be able to find the camera automatically. You then have to hold down the shutter button to enter pairing mode, and then press the shutter when prompted to confirm the connection.  After the camera has been paired, the app can automatically connect to the camera as long as the camera is turned on.

Shooting with a smartphone:

To use live view, tap on the red camera icon on the bottom right. The live view shows a monoscopic circular fisheye view.

Shooting techniques:
Here are some shooting tips for VR180:
– The camera must be level to avoid viewer discomfort. The pitch and roll must both be level (for photos, the pitch can be tilted up or down if that is your artistic intent).  The Mirage works best with a gimbal to ensure that it is level.
– Avoid moving the camera while shooting a video.
– In general, the camera should be around chin height.
– If the camera is too close to an object, it can be uncomfortable to view in 3D (like forcing your viewers to get cross-eyed). Do not be closer than about 2 feet.
– If the camera is too far from an object, it will not look 3D.
– Objects in the middle of the frame appear most three-dimensional. Objects in the periphery will appear less three-dimensional.

Summary: On one hand, VR180’s workflow is ideal — there’s no need to stitch the photos or videos.  You can simply upload them straight out of the camera to Google Photos or YouTube, and they will be immediately viewable by anyone to whom you send the link.  On the other hand, there are still no editing options as of May 14, 2018.  Even Google Photos’ own built-in editor can’t edit the VR180 photos correctly (photos edited with the mobile app become 2D 180, and those edited on the desktop app show the edits on the left eye but not the right eye image).

*As of May 8, 2018, I have not found a way to view VR180 photos on Samsung Gear VR, Oculus Go, Oculus Rift, Windows Mixed Reality, or Playstation VR.

Videos can also be shared on YouTube.  YouTube will automatically recognize VR180 videos.  On the YouTube app, you can tap on the Cardboard icon to view a video in VR.

Photos can also be converted to a non-VR photo.  The app converts the VR180 photo into a rectilinear ultrawide 2D photo (as if taken by an ulrawide lens, such as 18mm in 35mm equivalent) and saved to your phone’s gallery.   This type of projection works well for architecture.  However, as you move closer to the edge of the frame, objects will appear stretched, which is not a flattering look for people.  Unfortunately, there are no other projections available such as a fisheye view (which is a better projection for photos of people).

As a workaround, I used a third party app called VR Media Player (Android) to play the files with fisheye projections, and then I used screenshots as (non-VR) photos.  Here are the settings I used for the photos shown in this article:

VR180 videos are stored as 16:9 videos with side by side double circular fisheyes.

As of May 8, 2018, it is not yet possible to edit VR180 photos or videos.  If you edit a VR180 photo, such as by changing the exposure, only one side of the VR180 photo will be affected by the changes.  As for VR180 videos, there is no editor that can include VR180 metadata in an edited video, nor is there a tool for adding such metadata.

I haven’t found a way to embed VR180 photos but here is a link to an album.  The best way to experience them is with a VR headset such as a Google Cardboard viewer (if you don’t want to use a VR headset, then you’re probably better off with a regular camera tbh).  You can view the photos in VR by viewing the link on a smartphone and tapping the Google Cardboard icon.

Although the photos aren’t as detailed as some 360 cameras such as the Xiaomi, they still look reasonably detailed, with decent dynamic range, and pleasant colors and contrast.  It also appears that the Mirage has excellent flare resistance.

In low light, the Mirage uses very aggressive noise reduction.  This approach is typical and arguably appropriate for a camera intended for casual users.  Here are a couple of low light sample shots (to see the VR180 version, see my sample album).

This one was taken in very dark conditions:

For a compact point and shoot camera, I thought the Mirage low light photos look pretty good as long as you can manage to keep the camera steady.   Also for best results, you should zoom out as much as possible when taking your screenshot.

In 4K mode, Lenovo’s video quality is very good compared to most 360 cameras:

Here is a playlist of sample videos from the Lenovo Mirage, shot by me and by others.

Lenovo Mirage provides pretty good photo and video quality.  The lens is sharp except near the edges where there is a sudden drop in sharpness, and greater chromatic aberration.  The dynamic range is above average compared to consumer 360 cameras.  I also like the natural-looking colors and contrast of the photos and videos.

The Mirage has very simple controls and it’s easy to connect it with a smartphone (just launch the app and turn on the camera).  The bigger concern is that shooting VR180 is a little more challenging with several rules to avoid viewer discomfort.  It’s made a little harder for casual shooters because there’s no LCD screen, and the live preview on the phone isn’t representative of what you would see in VR view.  But you can get used to shooting it.

Viewing and sharing photos and videos is simple because there is no need to stitch photos or videos.  However, there is still very little support for sharing VR180, and there is no photo or video editor yet.   My understanding is that there will be a plugin for VR180 editing on Adobe Premiere but what we really need is a free or low cost VR180 editing option for both photos and videos to unlock the full potential of this exciting new medium.

I will update this review with a comparison between the Mirage and other 3D-capable cameras including LucidCam, Vuze, Insta360 Pro, and JedEYE.  I might include the Fuji W3 as well. 🙂  If you have any other questions, please let me know in the comments!

Insta360 ONE review and resource page (updated May 22, 2018) with tutorial, sample photos and videos, and comparison
Buying Guide: Which is the best 360 camera for vacation, travel or cruise? (updated August 2, 2018)
Comment