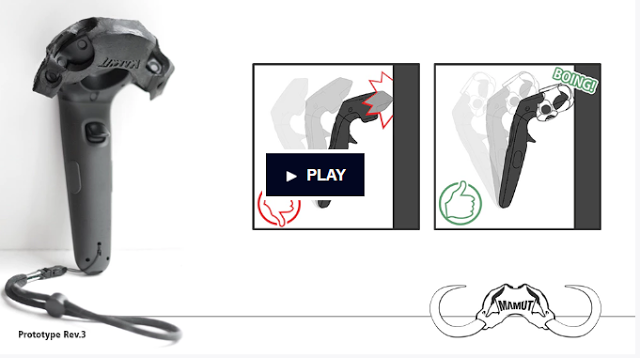 The Mamut Skull is a protector for the HTC Vive controller and it’s now available again for preorder.

A key component of the HTC Vive (reviewed here) is its motion controllers.  They help immerse the user in virtual reality by giving them an intuitive virtual extension of their hands.  However, they can accidentally hit walls, ceilings, or LCD displays.  More importantly, they can also accidentally hit people.

The Mamut Skull won’t prevent you from hitting people or objects, but it will add an armor around the controllers to mitigate any damage to people, objects, or the controller itself.   The Mamut Skull is made from thermoplastic polyurethane, which is used in some smartphone cases, hoses, and even bubble balls.

One challenge in designing the Mamut Skull is preventing the sensors from being occluded.  The Vive needs to see at least 3 sensors to be able to track the controller.  Here is an occlusion test.

The Mamut Skull is around $27 (kr230).  You can also get the complete kit with a sturdier strap and a microfiber cloth for $38.  Delivery is in December.

The Mamut Skull had a Kickstarter project but was cancelled.  Fortunately, the creators found alternative funding for the most critical piece of the project — the injection mould — thus allowing them to proceed to production and accept preorders.   The Kickstarter goal is now just $358 (approximately 13 orders of the Skull), and the creators will go to retail whether or not the Kickstarter is funded.

Here is the link to the preorder page.