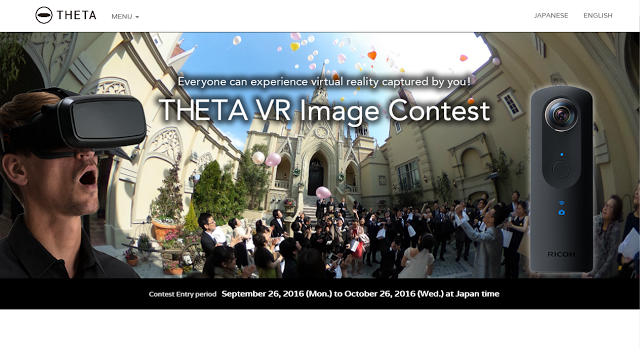 ​
Ricoh is holding a new contest for the Ricoh Theta, and the theme of the contest is Virtual Reality (VR), which may be signaling a subtle shift in emphasis within Ricoh.

THE CONTEST
There are three categories for the contest:
1. “What are you looking at?”
The photo or video should contain an element of surprise, and should capture a scene that can only be shown in 360 degrees.

2. “Moved moment, once again!”
Often, we would like to return again to a special time and place.  Use the Theta to capture a special moment of a beautiful scene or setting.
3. Open category.
Any photo or video that you would like others to experience in virtual reality.
Some of the rules:
1. The photo or video must be captured with a Ricoh Theta (reviewed here).
2. If you’re submitting a video, it must be trimmed to 10 seconds or less.
3. To submit your photo or video, upload it to theta360.com, then go to the contest website and click the “submit” button at the bottom of the page.  You’ll be asked to fill out an entry form.  In the entry form, you’ll be asked to specify the URL for the site, where you need to put the theta360.com URL.
4. There is no limit to the number of submissions you can make.
5.  The contest period is from September 26 to October 26, 2016, Tokyo time.  Winners will be announced November 4.
For a complete set of the rules, check out the contest website.
There will be 5 winners for each category, and each winner will receive an original Ricoh Theta T-shirt.  Their work will also be featured on a special site that can be viewed in VR on a smartphone (presumably using a Google Cardboard type viewer).
IMPLICATIONS
I think the contest is interesting because it shows an interest in spherical 360 photography as opposed to flat/cropped 360 photography (e.g. tiny planet or rabbit hole), which has thus far dominated the official theta360 Instagram account.  Moreover, Ricoh is going so far as to add a Google Cardboard view on their website.  I’m also curious about the fact that Ricoh is allowing video entries because when Theta videos are viewed in VR (as opposed to a “VR window” on a smartphone), the resolution will look very low.  If they’re interested in viewing spherical 360 photos and videos in VR, I hope it means Ricoh is working on adding a higher resolution video capability to the Theta.