Oculus has consistently taken the position that it is designed for seated or standing experiences.  Oculus made that design choice because they believe that roomscale is impractical, and that most consumers would prefer a simpler setup.  As recently as June, Oculus VP of Product Nate Mitchell is on the record for saying that “[t]he Rift is designed for standing and seated experiences.  The tracking system we’ve designed is specifically for that.” (see this interview with Gizmodo).
Today, Nate Mitchell tweeted that the Rift’s September update (v 1.8) for developers will include “Guardian, our boundary system for Touch.”  It’s the Rift’s version of the HTC Vive’s “chaperone” system, a virtual fence to help users avoid running into or hitting walls or furniture. 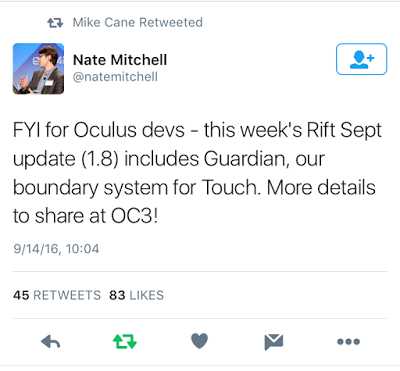 At first glance, a boundary system does not appear necessary for a purely standing or seated experience.  However, Oculus seems to be justifying the need for a boundary system because players might swing their Touch motion controllers and accidentally hit the wall or furniture.
Nonetheless, it may mean that Oculus is leaving the door open for roomscale VR.  The Rift was originally designed for a seated experience on a swivel chair.  Even standing was a verboten concept at Oculus.  But at some point, Oculus concluded that there is greater immersion when you’re standing.  In the Oculus Rift demo at Best Buy, representatives were asked to have users stand and even take a few steps.  Indeed, when I asked if I could do the demo while seated, the rep didn’t want to let me.  After some cajoling, she acquiesced, and I understood why they didn’t want to let people sit down: the experience becomes significantly less immersive.
If standing makes the experience more immersive, it would be logical to suppose that walking around would be even more immersive, and you would be correct.  (That’s why I chose the HTC Vive for my first desktop VR system.)  Of course, Oculus is aware of this.  Indeed, in July, Oculus updated the Rift’s Home software to support up to four sensors (the Vive only has two).
So let’s summarize the evidence:
The evidence suggests that even though Oculus publicly maintains that its system is for a standing or seated experience, it is at the very least making room-scale VR possible, if not actually inching toward it.
This is a welcome change for consumers and developers.  The desktop VR market is still very small, and until now, developers had been forced to either design for roomscale, knowing that Rift users would be left out, or to be forced to design for standing / seated experiences as the lowest common denominator.  With the Rift’s increasing support for roomscale, it decreases the risk for developing for roomscale, which hopefully means we’ll see more roomscale games available for both the Rift and Vive.