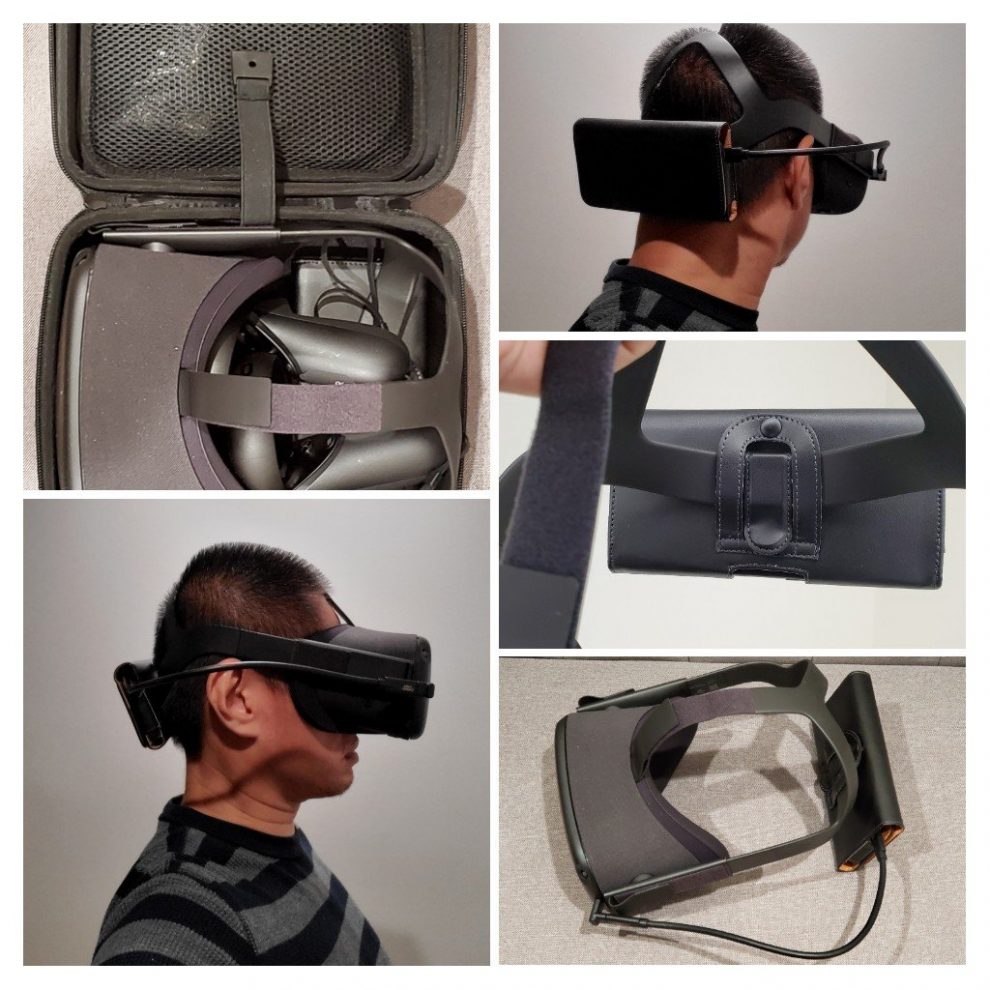 One of the issues about the Oculus Quest (reviewed here) is that it’s front heavy.  It also has a battery life of around 2.5 hours, which is quite good but could always be better.  Now you can solve both problems with these accessories.

The Oculus Quest has more electronics in it than desktop VR headsets: not only does it have four cameras, but it also has the processor, storage, and a cooling fan.  Not surprisingly, it is a bit front heavy.  For people with round heads, the back of the strap is designed to cup the base of your head, which relieves some of the weight.  However, the strap doesn’t work as well for everyone.  After wearing it for a while, it can cause some strain, especially when you have to tighten the side straps a bit to hold the weight of the headset.

One solution is to add a weight to the rear strap that would offset the weight of the front of the headset.  But why attach a dead weight when you can attach a battery pack instead, one that was powerful enough to charge the Oculus Quest?

The Omars battery pack (or Topmate Power Bank) is a 10,000mah battery pack that can power up to three USB devices.  It has two USB type A outputs (2.4A and 1A) and a USB Type C output which can provide output of up to 3A, powerful enough to charge a Macbook and yes, powerful enough to charge the power-hungry Oculus Quest (which requires at least 2.5A to charge while using it).  Another option is this Charmast power bank with two 3A USB Type A ports.

But how do you attach it to the Quest?  This is a bit of a challenge because the back strap of the Quest is a closed triangle (i.e., you can’t open it or undo it).  Fortunately, after looking through many other possible cases, I found a case that not only fits the Topmate but also has TWO clips that can clip on to the rear strap to ensure it won’t fall off while you’re in VR.

Finally, we’ll need a USB C to USB C cable.  I found one that is only a foot long, which is just enough to connect the Quest to the battery pack.  If you are getting the Charmast power bank, use this cable instead.

How well does it work?  It works exactly as I hoped — actually it’s better in a couple of respects.

First of all, it offsets the weight of the headset and balances the headset.  And yes, I don’t have to pull the strap so tightly anymore.  This relieves pain on my cheeks when using it for prolonged periods.

Second, it is indeed powerful enough to charge the Quest even when I’m using the Quest.  Third, I found that I don’t have to use the second right angle adapter for the battery.  I can plug the USB cable directly.  Fourth, to my surprise, I was able to store the Quest with the battery pack attached in my 3rd party Oculus Quest case — I didn’t have to unclip the battery pack.  All I do is disconnect the cable, which can be stored in the pocket of the case. Please note that you should cover the lens to protect it.  I used the cardboard insert it came with.  If you already threw yours away, just cut one from any cardboard packaging.

Again, to clarify, the 3-amp port is the Type C one.  Put the battery pack in the holster such as the Type C port would be on top so that you can connect the USB cable to it directly.

Here again are the accessories I ordered:

Alternative: Charmast battery pack, which has two 3A USB Type A ports.

3. Holster with two clips.
4. Right angle USB adapters
5.  This case can fit the Quest with these accessories.

Thanks for using these affiliate links to support 360Rumors at no additional cost to you so I can do more tests and reviews!