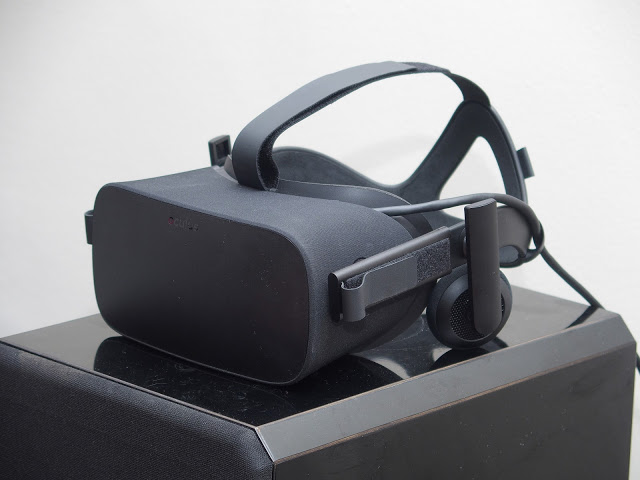 Oculus has been adamant that the Oculus Rift requires three USB 3.0 ports and one USB 2.0 port.  However, it appears not only that the Rift and Touch can work with just USB 2.0, but that it may even perform better for some PCs!  (In my case, it solved missing sound from the headphones and random disconnections.)

For users who don’t have a USB 3.0 port, Oculus recommends getting a PCI-E card with a Fresco Logic FL1100EX chipset.  I got one called Inateck, which was recommended by Oculus.

THE PROBLEM
However, ever since I got the Oculus Rift, I have had a couple of issues:  First, there would often be no sound from the headphones, even if I specified that the audio output would be from the headphones.  When there is no sound, I found that I needed to unplug and replug the HDMI or the USB.  After perhaps five to ten attempts, I would finally get sound.  It was quite annoying, but I didn’t know what was causing it, and I wondered if it might be a defective cable (I bought a used Rift, so who knows what the previous owner might have done).

Second, occasionally, the headset would just suddenly stop tracking and then I would get a notification that the headset was disconnected.  I would then have to close Oculus Home, reconnect the headset, and restart Oculus Home, and the issue would be fixed (except that I would have lost any unsaved progress).  After I got the Oculus Touch last night, I noticed that this would happen more often.  I dreaded the possibility of this happening in the middle of an online PvP battle.

A third issue is that my headset would always show up in the settings as being connected via USB 2.0, while the sensors were recognized as USB 3.0.  It didn’t have any noticeable effect on performance, and on the /r/Oculus subreddit, there were other people who experienced this and just brushed it off.

THE SOLUTION
Since the disconnections seemed to happen more often with Oculus Touch, I thought that perhaps it has something to do with the USB controller bandwidth.  When using the Touch, you need a second sensor, connected via USB 3.0, which will require using more of the bandwidth.

Meanwhile Oculus said that if you attach a third sensor, they recommend using USB 2.0 because the bandwidth could be exceeded.

This gave me the idea of switching one of my sensors to USB 2.0 (one sensor connected via USB 3.0, the other one connected via USB 2.0).  I tried it and it seemed to work fine.  I took it one step further and tried connecting both cameras via USB 2.0.  Again, it continued to work.  I didn’t notice any deterioration in tracking.  I also noticed that when both sensors were connected via USB 2.0, the headset is recognized as USB 3.0 — the first time that ever happened for me!

I tested the performance but unfortunately I was still getting random disconnections.  I wondered what would happen if I connected the headset via USB 2.0.

So if you are experiencing any of the issues I described, try connecting via USB 2.0 to see if it solves those problems.  Also, if you are considering getting an Oculus Rift but don’t have enough USB 3.0 ports on your PC, I would not worry about it.

Tutorial: how to use the Oculus Rift and Touch for roomscale VR with just two sensors
TECHNIQUE: The Secret to Getting Thousands of Views on Your 360 Photos
Comment