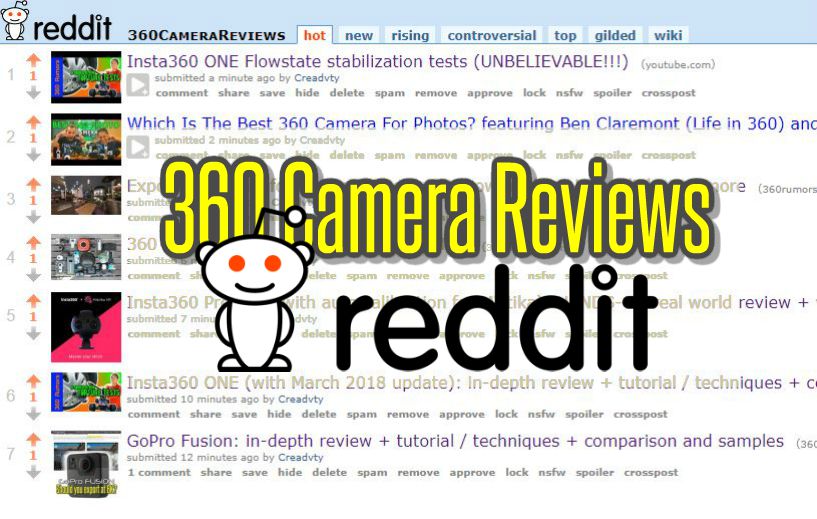 If you want to help me change the world, join the new subreddit r/360camerareviews. Here’s why you need to.

Do you want cheaper and better 360 cameras? Sure you do. The only way for it to happen is for 360 cameras to become really mainstream. I have a plan to make it happen.

360Rumors.com is not purely a news site. I have an agenda. It’s there in my mission statement. Besides giving you guys value through information, I also seek to educate people about 360 cameras. I firmly believe that if more people understood the benefits of 360 cameras, they would realize how useful they are.

If you’re not a Redditor, here’s the lowdown: Reddit is like a bunch of forums with somewhat tech-oriented users (usually more technical than typical forums). Many videos that became viral were discovered on Reddit. It’s a powerful way to spread ideas and gain cutting edge information (for example, I found out about the GoPro Hero 2018 before they posted about rumors of it on DPReview). These are some of the reasons Reddit’s tagline is that it’s the “front page of the Internet.”

As you can imagine, there are already a few 360 camera-related subreddits. What makes r/360CameraReviews is that it will focus on high quality content from 360Rumors and my friends such as Ben Claremont, Hugh Hou, and Sarah Redohl. This high quality content is what I believe will appeal to Redditors. The other difference is that I’m going to make it a nurturing environment, unlike the harsh or toxic environments in some subreddits where people are ready to pounce on anyone to downvote them.

If you’re on Reddit, I need your help to join the sub and support it by upvoting topics you find interesting. This will send a signal to curious Redditors that the topics are helpful. If you’re not on Reddit, I also need your help to join it and support it as well. Will you help me spread the news about 360 cameras on Reddit? Please join r/360CameraReviews! Together we can build a strong supportive 360 community there (just as I’ve done with a number of Facebook groups) and help people learn about 360 cameras!