There are now several platforms for sharing 360-degree content.  Kuula.co, is a platform for 360-degree photos and computer-generated images, and it distinguishes itself from its competition by allowing users to add special effects.

Kuula is browser-based, and is accessible on desktop, smartphone or tablet.  No app is needed, whether for viewing or uploading.  Kuula also supports Google Cardboard when an image is viewed on a smartphone.

Kuula accepts files up to 10mb with a resolution up to 10,000 x 5,000 pixels, in either JPG or PNG format.  The only requirement is that the image is in equirectangular projection.

Here is a sample image:

Did you notice the cool lens flare?  That’s one of the effects you can apply when you upload an image.  You can apply filters or the lens flare effect.  As you can see, the lens flare is not a simple overlay, but is dynamic and changes with the angle like a real lens flare, which I think makes the image look more 3D.

There are buttons for sharing your post automatically on Facebook, Twitter, or Tumblr.  There is also an iframe embed link customizable for width and height.  Finally, you can also share the URL to the post, which you can send by text message, email, etc.

If you share via Facebook, it posts a static preview of the image and identifies it as a 360-degree photo: 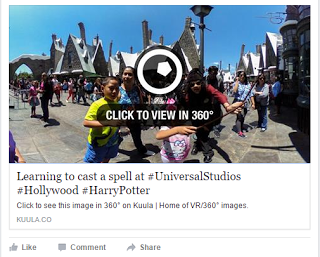 Friends who click on the link seamlessly see the post on Kuula, whether they’re on desktop or smartphone:

EXPLORING
You can find the latest uploaded images, or by popularity, or by number of likes.  Kuula also selects photos to be Featured.

Here is one of the Featured photos, this one by Paul Pichugin:

You can check out Kuula here!