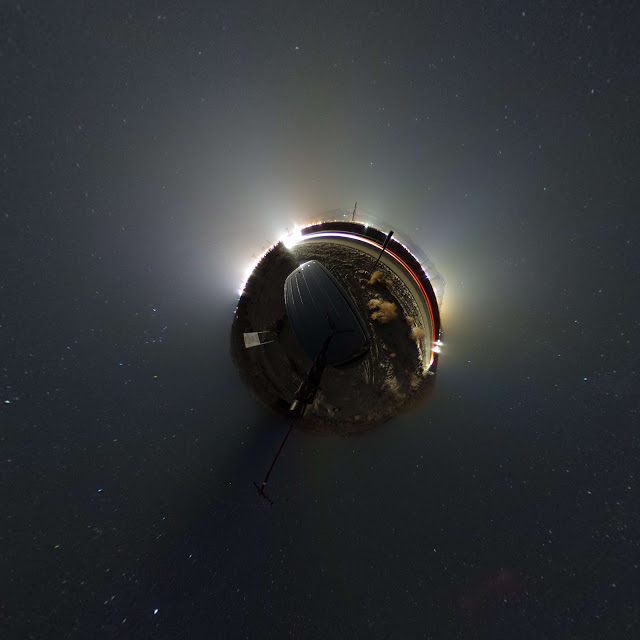 Over the Thanksgiving weekend, I got to use my Ricoh Theta S for night sky photos.  Here are the settings I used.

For Thanksgiving, my family and I went to visit my parents in the desert region of Southern California.  The desert is great for taking photos of the night sky for several reasons.  First, since it’s far from the city, there’s less air pollution and the skies are clearer and drier.  Second, there are usually less clouds.  Third, it tends to be flatter, and therefore has a lower horizon.  Finally, because it’s farther from inhabited places, there’s less light pollution.

Light pollution is when artificial light from cities brightens the sky unnaturally.  Stars have relatively faint light and therefore you need a long exposure to gather enough light to make stars visible in the shot.  The problem is that while you’re gathering light from the stars, you’re also taking in light from all other sources – including cities, which outshine the stars.  Therefore, in an urban environment, with many artificial lights illuminating the night, it is harder to take photos of the night sky.

My parents’ house is in a little town in the desert, a couple of miles from other towns.  When most people were asleep and most lights were turned down, I tried to take a photo in the backyard.  I used the Ricoh Theta S, currently the only 360 camera with a long exposure (up to 60 seconds).  Here my exposure was f/2, 60 seconds, ISO 200:

Even though the backyard was very dark (I could barely see the ground), there was still too much light.  I then drove to the nearby hills, which were pitch black, with no streetlights.  It was quite cold and kind of scary for me, not knowing if there were snakes, scorpions, coyotes or who knows what.  I also didn’t want the car to get stuck in the sand, or have the tires punctured by cacti, so I drove off only a short distance from the road.

I liked the result, and the sky was clear enough that I could identify the constellations (click to zoom). For example, on the bottom left near the edge of the light, you can see Orion, Taurus to its right, and Pleiades. 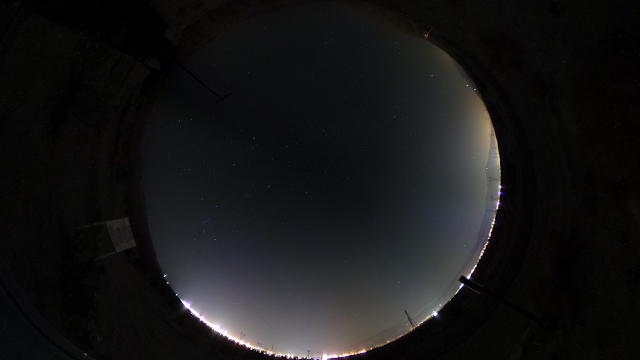 As you can see, even though it was pitch black, the lights in the distance still showed up prominently in the shot.  Later, I also tried to take another shot while cars were passing by, and I thought the shot looked a little more interesting because it illuminated the ground (f/2, 30 secs., ISO 100).

I enjoyed taking night sky photos with the Theta (or rather, I liked the results).  I plan to try it again, and perhaps try to get a photo of the Milky Way, as in this beautiful example:

DEALS: Save $40 with the Samsung Gear 360 (International Version)
DEALS: Save $290 on this Oculus Rift bundle!
Comment