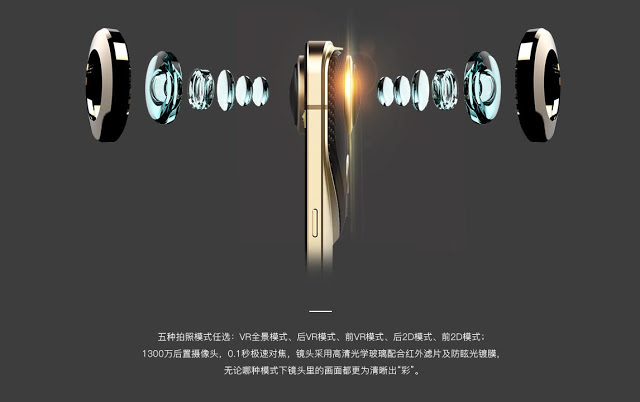 Here are their features for their 360 cameras:
– fully spherical 360 degrees
– 210-degree hemispherical mode
– f/2 aperture
– two 13mp sensors
– 26mp photo resolution
– in-camera stitching
– realtime preview
– ultra-thin 23.8mm lens module
– vertical orientation correction
It is remarkable that Protruly was able to fit a spherical camera in a 23.8mm lens module — approximately the same width as the Theta S (which is 22.9 mm thick), which could mean that, like the Theta, these phones are capable of good quality stitching.

The video resolution is supposedly 1080p, although I am not sure if that refers to the non-360 camera or the 360 camera, or both.

Here are the phones’ other specifications:

The Extreme is 8800 yuan (US$1,271.59), while the Elite is 3980 yuan (US$575).  I’m not sure what is the technical difference between the two phones insofar as specifications are concerned.  Both will be available on November 30.
Thank you to Pepe Vazquez for bringing this to my attention!
Update: the Extreme will supposedly have real diamonds embedded in it which is probably why it’s more expensive.  Thanks to Jim Jensen of the Google+ Photo Sphere community for this additional info!