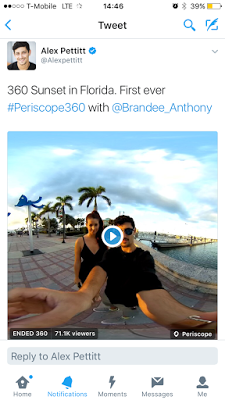 You can now watch live 360 video on Twitter and Periscope.

You can see a video of a 360 livestream here.

Currently, only select accounts will be able to create a 360 livestream.  Periscope says they will be “rolling out the feature more broadly during the coming weeks.”

Thank you very much to Mike Cane (Atomic Supermen blog) for bringing this to my attention!