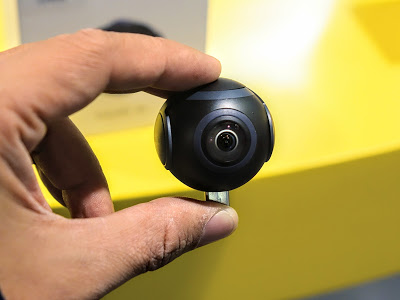 Insta360 confirmed that you can use the Insta360 Air for a 360 video chat via Skype!

Insta360 Air is a 360 camera accessory for Android phones, which enables your Android phone to take 360 photos and videos, and even livestream wirelessly in 360 (soon via Twitter / Periscope, YouTube, or Facebook).  Besides being used as a smartphone accessory, the Insta360 Air can also be used as a 360 webcam.  See this video.  (Note: the package includes the special USB connector that doubles as a stand.)

Meanwhile, Insta360 confirmed that the Insta360 Air can be used for 360 video call chats on Skype on your smartphone!

I don’t know if the feature is immediately available on launch or a feature that will be released later through updates.  I’m also still trying to find out if you can do a 360 video chat on Skype for PC as well.

Although other cameras such as the Ricoh Theta have been used for 360 video conferencing, Insta360 Air could be the first to do so wirelessly.

WHERE TO GET INSTA360 AIR
Insta360 Air is one of the most affordable fully spherical 360 cameras, at $119 MSRP.  However, until January 26, it is still possible to get it with a 20% discount through its Indiegogo crowdfunding campaign, which it has been funded more than 1,200%.  Unlike other crowdfunding campaigns which have often suffered from delays, sometimes for years, the Insta360 Air is actually shipping earlier than promised, with the first batch being shipped out in the first week of February 2017.