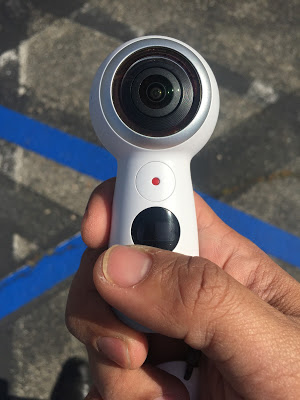 Here is an update on the limits and compatibility of the 2017 Samsung Gear 360 with iOS and Mac.

The original Samsung Gear 360 was not compatible with iOS or Mac.  The most you could do on an iPhone was take photos using the Google Streetview app as a workaround.  To use the desktop software to stitch or edit videos on a Mac, you needed bootcamp or another Windows emulation software to run the Windows version of the desktop software.

Fortunately, the 2017 Gear 360 is compatible with iOS and Mac.  However, there are several limitations.  Here are the limits I’ve found so far.

iPhone SE (on iOS 10.3.1) is listed as being compatible but I can only use it to view photos and videos.  When the camera is connected wirelessly, the app freezes.

Stability.
Some iPhones may experience stability issues.  As I mentioned, on the iPhone SE, the current version of the Gear 360 app freezes then eventually crashes whenever the camera is connected to the app.  On my son’s iPhone SE, the app often crashes when trying to stitch videos, and very often loses its wireless connection to the camera when stitching.

I experienced no stability issues on the iPhone 6.

MAC COMPATIBILITY
Mac users will be able to download a stitching program called “the Gear 360 program.”  However, as of today, the software is not yet available.  The user manual only says that it is available on samsung.com, without specifying where on the website.  The printed version of the manual doesn’t say either. 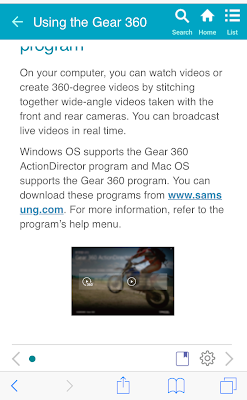 Windows PCs get an ActionDirector which can both stitch photos and videos, as well as edit videos.  As with the Gear 360 stitcher for Mac, the user manual doesn’t say the specific URL for downloading the software.  As of April 19, I haven’t found the desktop software yet.

Thank you very much to journalist, author, and filmmaker Philipp Hesse for sharing this information!  For the latest hands-on information on the 2017 Samsung Gear 360, bookmark 360Rumors.com or like us on Facebook or Twitter.

Here is the link to download the new ActionDirector desktop software for the 2017 Samsung Gear 360
Insta360 Nano is now the first 360 camera with realtime image stabilization! And it works!
Comment