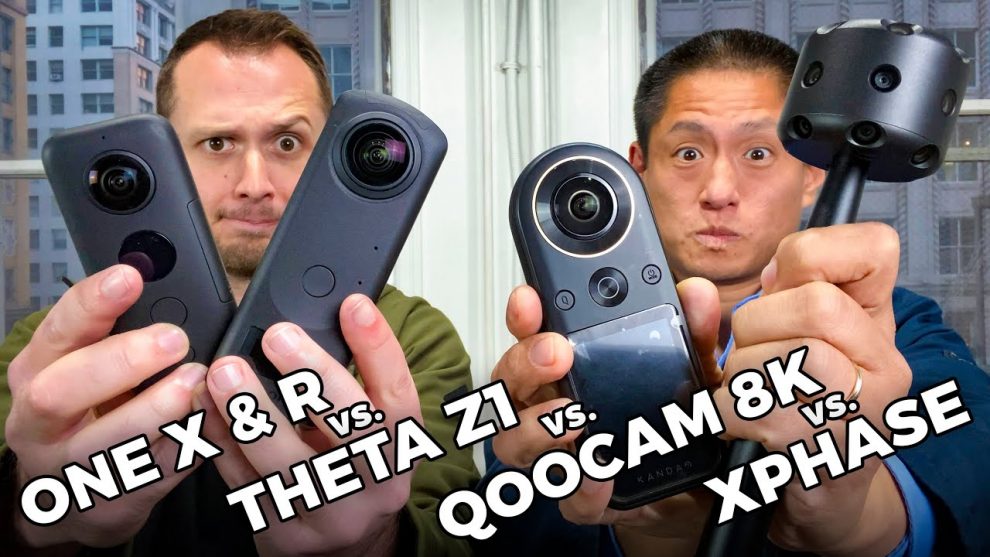 Which cameras came out on top?  Here’s our comparison:

Here are the 360 photos we shot and edited.  You can compare them side by side using the 360 Camera Comparison Tool.

Here is a summary of our findings.

Insta360 One X: the One X is probably still the most popular 360 camera. Although it is known for its 360 video and reframing capabilities, we also included it in this comparison.  We were both surprised at how well the One X did.  Colors and contrast appeared natural and pleasant, and dynamic range was quite good especially for the HDR with 4EV intervals.  On the other hand, it was not very detailed.  Nonetheless, it has usable quality for virtual tours.

Insta360 One R:  The One R had not yet been released at the time we shot this video, but Ben was able to take some sample shots with the One R later in similar conditions.  The One R had better dynamic range than the One X thanks to the 9-shot DNG mode.  In terms of detail, it appeared similar to the One X.

XPhase Pro: With 25 sensors and 135mp stitched resolution, the XPhase Pro is the most detailed 360 camera and this comparison confirmed that.  XPhase also did a very good job preserving the highlight details outside the window using a -2EV exposure.  However, the XPhase suffered from serious flare artifacts from the softbox.  In addition, the shadow recovery was poor — noisy and with inaccurate colors.   We look forward to testing the XPhase again with updated firmware.

Ricoh Theta Z1: The Theta Z1’s 1-inch sensors are the largest sensors among consumer and prosumer 360 cameras.  All other factors being equal, larger sensors have much better image quality – better dynamic range, bit depth, and signal-to-noise ratio.  In this test, the Theta Z1 had very good results even without editing when using the built-in HDR mode.  It had very good dynamic range, and looked reasonably detailed, even though it is not as detailed as the XPhase.  When used with bracketing and manual HDR, the dynamic range is incredible.

Kandao Qoocam 8K: The Qoocam 8K’s key feature for photos is that it can take an 8-shot DNG Raw burst, which can be stacked without ghosting using Kandao Raw+.   For even better quality, Raw+ can stack 16 photos from two 8-shot bursts.  In this test, the Qoocam’s DNG16 photos looked amazing, with beautiful and accurate colors and visibly greater depth than the other cameras.  On the other hand, it had less detail and more glare than the Theta Z1.

If you liked this video, check out my other collaboration video with Ben here.  You can also check out Ben’s Virtual Tour Pro course, where you can learn everything you need to start a virtual tour business.