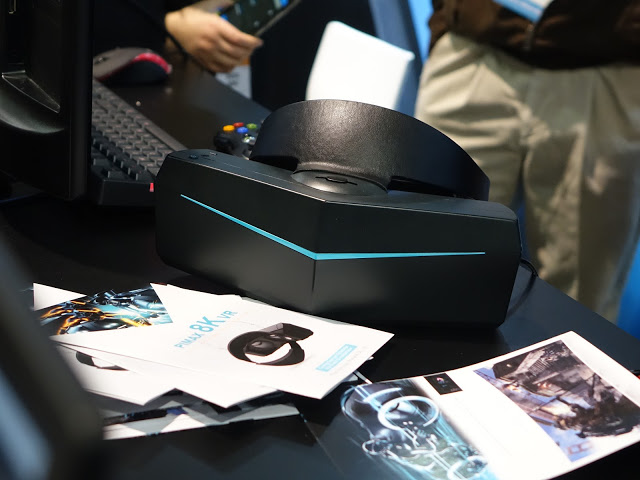 Pimax 8k is the world’s first VR headset with 8k resolution.  I got the chance to try it out at CES 2017.

Most of the current desktop and mobile VR headsets have screens with limited resolution.  Their individual pixels and the gaps between them are visible, making it look like there is a screen door over them.  The screendoor effect can be distracting or immersion-breaking for some people.

I got to try the Pimax 8k at CES 2017.  In fact, it was one of the first exhibits I visited because I was curious about its quality. 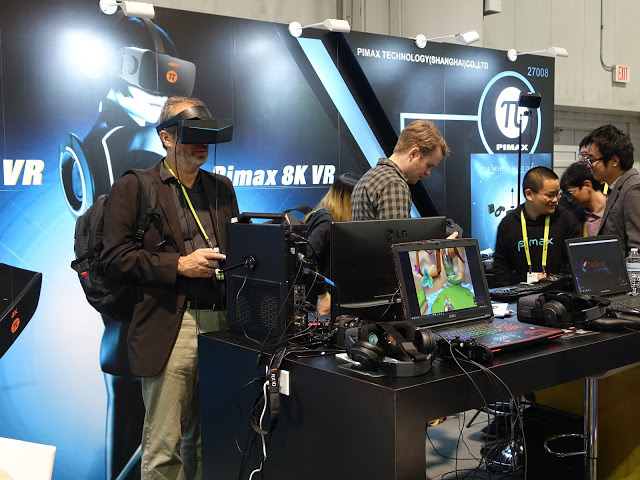 Here’s what the Pimax 8k system looks like.  It includes the headset, two base stations, two controllers, and an external tracking camera. 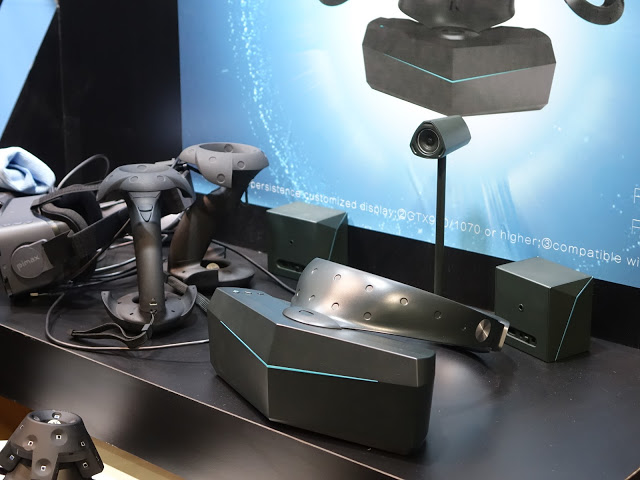 If it looks suspiciously similar to the HTC Vive, you’re correct because Pimax is unofficially compatible with Steam VR.  However, what I’m not sure about is whether the tracking works exactly the same way as the HTC Vive.

The Vive uses an inside-out tracking system.  The headset has 32 sensors and each controller has 24 sensors to sense the invisible signals from two lighthouse base stations.  Meanwhile, Pimax has an external camera.  I don’t know how the external camera works in conjunction with sensors in the headset and controllers.

Anyway, I demo’d Lucky’s Tale (or a clone of it) on the headset.  I’m not sure if they used Revive to run the game.  In any case, two things stood out for me: first, it is true that there was no screendoor effect (SDE).  Second, the field of view did in fact fill almost my entire field of vision.  It looked much better than all other VR displays I’ve had or that I’ve tried.

In terms of comfort, the headset felt a little heavy.  But I liked the fact that it uses a strap similar to the Playstation VR, which suspends the display in front of your eyes rather than pulls it onto your face.

Unfortunately, I could only test the headset.  The demo did not include the base stations, external camera or motion controllers.  With only the headset, tracking was limited to rotational tracking.  I couldn’t test how well its positional tracking worked, or how well the motion controllers work.  In terms of rotational tracking, Pimax 8k is limited to 60 Hz (compared to the 90 Hz of the HTC Vive, Oculus Rift, and Playstation VR) and therefore it didn’t look as smooth.  But it felt usable (similar to the Gear VR, which is also 60 Hz).

Moreover, although I could not see any SDE, I could see individual pixels.  I think this is because Pimax reportedly does not receive the native resolution but rather receives a lower resolution signal then scales it up.   Another issue that has been raised is that the current prototype appears to use two HDMI 1.4 cables (instead of one DisplayPort cable).

Pimax 8k is expected to be priced at around $500, and will be offered on Kickstarter.  It will also be available from GearBest (you can sign up to be notified).