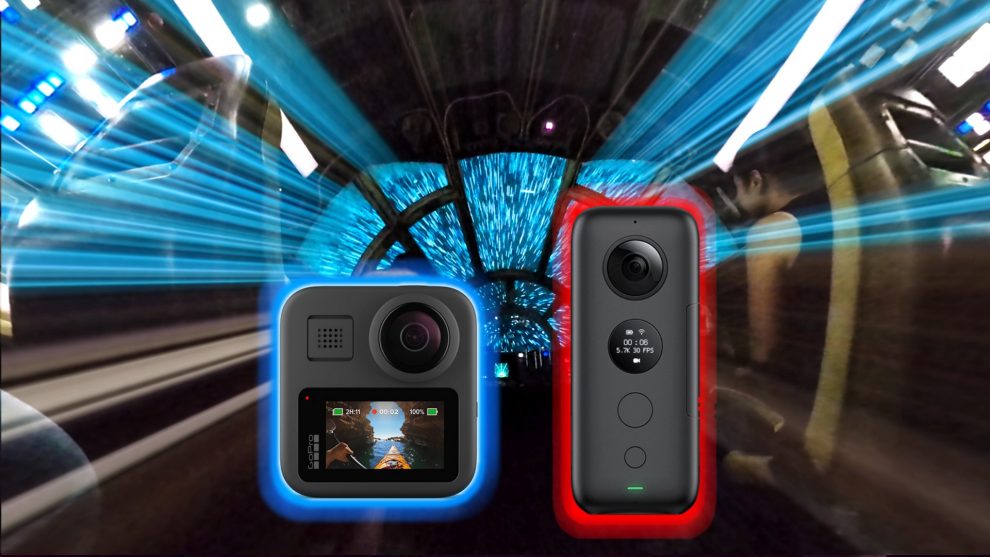 GoPro MAX has now been launched!  All of my 7 predictions have been confirmed, including features that have never been previously available in a consumer 360 camera.  Here are the Max’s specifications, features, an exclusive preview, and a preliminary review (I just received my MAX and am conducting my own tests).  April 3, 2019 update: new features added.

In-depth GoPro MAX vs Insta360 One X review and comparison, after one month of use:

Part 1: Why should you be interested in the GoPro MAX?  How is it better than the competition?  Is it worth waiting for?  In this video, I discuss the MAX’s specifications, key features, and weaknesses.

Part 2: New information on GoPro MAX, plus whether you should get MAX or Hero8, or Insta360 One X?

Here are the specifications of the GoPro Max:

3. Realtime stitching with stabilization in non-360 mode.  Nick Woodman said he wants it to be as easy to use as a regular GoPro.  Max has realtime stitching with stabilization in non-360 Hero mode, a feature that has never been seen before in a consumer 360 camera.  It also has realtime stitching for 360 photos (as in the Ricoh Theta Z1 and other Ricoh Theta cameras).  360 videos are what I would describe as “pre-stitched,” which can be viewed as a stitched and stabilized video in the GoPro app, and is ready for editing without further stitching, but can’t be directly uploaded to YouTube or Facebook without exporting from the app.

Here is a video that shows the Max’s stabilization performance:

4. Automatically create overcapture video, shoot in 360, or vlog with a front-facing camera.  The Max has two video modes: a 360 video mode and a non-360 Hero mode.

6. Replaceable lens cover; waterproof.  This is a feature that many people have been asking for in a 360 camera.  While a few cameras have had it, the ones that had it (Virb 360, Orbit 360, Keymission 360, and to some extent the original Samsung Gear 360, etc.) were plagued by excessive glare.  I think GoPro wouldn’t add a replaceable lens unless they have solved the glare problem.  So I’m optimistic that glare will be well controlled.

In addition, the protective lenses are spherical, which may enable the Max to stitch with minimal refraction underwater, up to a depth of 16ft (5m).  The photo below is a framegrab from a GoPro promo video.  The stitch line is appears to be around 45 degrees from this view.  The woman is within the stitch line, yet she is stitched smoothly.  However, there is a circular line in the frame which seems to show that they used some type of dive case, so we can’t be certain yet how the MAX will perform underwater without a case.

8. Keyframing.  With the GoPro app, you’ll be able to keyframe camera movements for 360 photos and videos.

9. UPDATED: Max Timewarp (hyperlapse) and timelapse.  The Max has an improved hyperlapse feature for both 360 and non-360 videos.  In non-360 videos, you can switch back and forth between hyperlapse and regular video.  As of April 2020, you can now also create a time lapse in both 360 and non-360.  The differences between a time lapse and hyperlapse in the Max are that a hyperlapse is generally for a moving camera, and a time lapse is usually for a tripod-mounted camera, and usually for longer intervals and/or longer exposures (for example, a time period of several hours can be shown as a few seconds of video).

Here are a couple of samples shared with permission by Luke Bell:

Here is a sample by GoPro:

11.  Live streaming in 1080p with stabilization.  The Max can livestream in non-360 mode in 1080p resolution to YouTube, Facebook, or other streaming services that support RTMP.

13. Self-timer.  The Max finally adds a self-timer for photos, an essential feature that was strangely absent from the GoPro Fusion.

15.  Short clips.  Like Snapchat Spectacles or the Insta360 Go, you can capture short, 15 or 30 second video clips in horizontal or vertical format that are ready for upload to Snapchat, Instagram Stories or other social media.

16.  Voice command.  As with the Fusion and Hero, you can use voice command to control the Max.

What’s in the box?

The MAX packaging looks similar to that of the Fusion.  Besides the camera, the package includes the following accessories:
– one rechargeable battery
– USB Type C charging cable
– a pair of lens covers
– a pair of replaceable lenses
– GoPro quick release clip and adhesive mount
– GoPro thumbscrew
– a microfiber pouch with two small pockets for the lens covers

GoPro MAX’s workflow is easier, faster, and more powerful than that of the Fusion. 360 photos don’t need to be stitched.  They are automatically stitched in-camera, with a level horizon and 360 metadata. Non-360 HERO mode videos are likewise ready to use straight out of the camera, in mp4 format (either in H.264 or H.265), with stabilization.

360 videos are what I would describe as “semi-stitched.”  The files are in proprietary *.360 format, and cannot be directly uploaded to YouTube or Facebook, nor can they be immediately edited.   They are stitched in-camera and converted into equiangular cubemap format (the first 360 camera to use that projection) for efficiency.  However, the stitchline is blended during postprocessing.  As for stabilization, the camera adds rolling shutter correction (again, for efficiency), but stabilization is also added in postprocessing.

As of November 2019, the Player app with keyframing capabilities is available only for Mac.  For Windows users, you can use an app called MAX Exporter, which enables batch exporting of 360 videos from the Max.  Videos can be exported in 5.6K in cineform format, or up to 4K in H.265 (HEVC) or H.264 format.  In addition to file format, you can choose whether to enable horizon level (roll stabilization), world lock (which means the video will be oriented toward a fixed compass direction, regardless of where the camera is pointed), and 360 spatial audio.  Videos in Cineform format can be played back in the free GoPro VR Player app.

How to update the firmware

The simplest way to update the firmware is to connect your MAX to your GoPro app on your phone. If there is a new firmware, you should get a popup notification prompting you to update. Occasionally, you might not get an update even if it is available. Here’s how to update your MAX manually:

2.  In the next screen you’ll be given a link to download the firmware for your MAX as a zipped file.

3.  Extract the zip file and you’ll see a folder called UPDATE.  Copy the UPDATE folder (not the zip file) to your MAX’s micro SD card and turn on the MAX.  It will power cycle a few times and when it’s done, you’ll see a sign that the update is complete.

Download sample GoPro MAX photos and videos here (for personal use only – please don’t post anywhere).   You can view the photos on GoPro VR player.  For the 360 videos, you’ll need to stitch them first on the desktop app either for Windows or Mac (see above).

Here is a sample video from the GoPro MAX by @abekislevitz, including the behind the scenes view of how it was shot:

The intro shot for the @jonolsson1 @benjaminortega vlog this week! We had an idea to start the vlog as a cool one-shot take. We started thinking about a drone shot that flew through this villa but landed on doing a 360 shot so we could create a shot that was very unique! I filmed it on a @270pro pole – swipe over to see a little BTS of how it came together! It was super fun to hang and collab with some talented like minded peeps across the world in some epic locations. Thanks @douchebags for bringing us all together! Benni is an absolute editing animal and 2 vlogs from our trip are already up on Jon Olsson’s YT! Check my story or hit the link in my profile to see part 1. The Benni segment starts 5 min in. Thanks for a rad trip boys! @oskarbakke @olsson92 @chrisfarro @jacob @lifeof_riley // #gopro #gopromax #goprofusion #dbtravel #dbfamily #douchebags #monaco #360video #overcapture #france #frenchriviera #bennified #jonolsson

Here is another sample video of the MAX by @travisrice.

Announcing #GoProHERO8 and @GoPro MAX. Thoroughly impressed with how damn good these cameras are getting! . Last winter in BC, found this sniper chute to test out the new Max 360 Camera. Spooky blind roll entrance and sheer cliff to the left. Better snow than I was expecting ⚡️🤘🏽⚡️. Finding the right places to ditch speed is the name of the game and it works best when done leaning into a pow detonation!

Here is a sample photo from the GoPro MAX in tiny planet format.

This is another MAX photo (unconfirmed):

GoPro MAX vs Insta360 One X and GoPro Hero8

Here is a comparison of photo quality between MAX and Insta360 One X.  Based on these samples, it appears that MAX photos are slightly more detailed than those of the One X.

For video quality, I found that at default settings (sharpness: high), MAX has similar detail but higher acutance (edge contrast) than One X in the center of the lens, while One X was noticeably more detailed near the stitch line.  They had similar dynamic range, although Max’s GoPro color profile is much more contrasty.  You can check out these side by side comparisons yourself with the 360 Camera Comparison tool.

MAX flat mode was more similar to Insta360 One X standard mode, which appears to confirm that the difference between them is attributable to the higher contrast of the MAX default settings in GoPro color mode.

MAX also had higher acutance than Fusion, as though the MAX had a clarity filter applied.

Here is a low light and stabilization comparison between MAX and One X:

Here is a comparison of stabilization and image quality between GoPro Hero8 and MAX, by Abe Kislevitz: