As reported by my friend Sarah Redohl at ImmersiveShooter, Insta360 updated the app to version 1.10 and added several new features.  I’ve tried them out and they’re pretty cool!

The update added live streaming in tiny planet mode called “Animation Live,” which allows you to change the tiny planet in real time.  To my awareness, Insta360 Nano is the first 360 camera to have that feature.  Here’s a sample:

The update also added a myriad of stickers.  The stickers are automatically mapped to the 360 photo or video so that they won’t be distorted no matter where you position them.  Although the stickers are not 3D, they will move along with the sphere.

The app will detect faces and by default, stickers will be placed over the faces, but you can move them anywhere.

The app update also enabled sharing to Snapchat.  You can take a still image or export an animation and it will be sent straight to the Snapchat app. 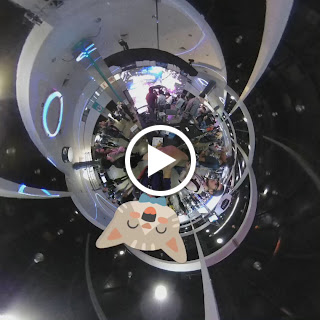 It seems there is no function yet to add Snapchat filters to faces in the 360 photos.

The features added today are examples of why I love Insta360 — they’re always looking for ways to improve their users’ experience.  I’ve used cameras from many different manufacturers (360 and otherwise). No other company comes close to the responsiveness, ingenuity, and innovation of Insta360.

Thank you very much to Sarah Redohl (from ImmersiveShooter) for sharing this info!