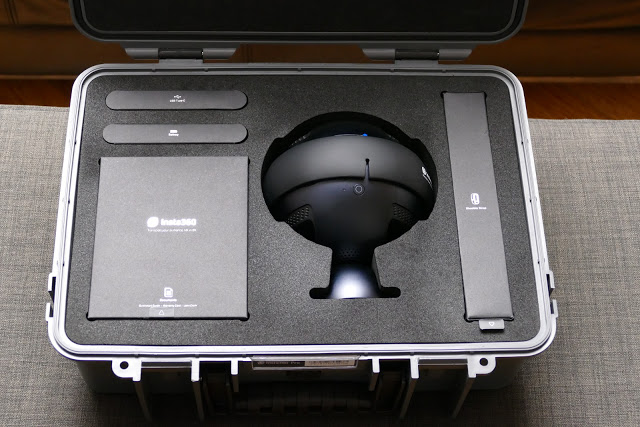 I just received my Insta360 Pro last night!  Here is an unboxing and my first impressions, or otherwise entitled, “How I spent my tax refund!” lol

When Insta360 said they were going to create a professional camera to rival the $5,000 GoPro Omni rig, I honestly wasn’t sure if it was just an exaggeration for marketing.  Sure, the Insta360 Nano and Insta360 Air were excellent cameras, but they were designed for consumers.  Could a young company such as Insta360 really build a camera that could approach the quality of the 8K GoPro Omni?

Later on, Insta360 also announced that the Insta360 Pro would have gyro-based realtime stabilization, which can keep the horizon level even while live streaming in 4K, the first professional 360 camera with such a capability.

Of course, specs and features alone don’t mean much without good image quality.  Insta360 posted sample photos and videos that showed remarkable image quality — so high as to rival even the vaunted $40,000 Nokia OZO in my opinion.  See the samples for yourself.

I ordered one (no it was not given to me for free!) and finally got it last night.  Here is the unboxing video.


As you can see Insta360 Pro comes in a sturdy hardcase with IP67 water resistance.  When you open it, you feel like a super spy on a secret mission. 😀

The Insta360 Pro has a beautiful gunmetal blue finish (also available in silver) and feels solidly built.  It is a little heavy (1228 grams or 2.7 lbs.) – about the same weight as a professional full frame DSLR such as the Nikon D3 I used to have.  It is about the size of a small watermelon.  Here is the Insta360 Pro next to the Panono and the Vuze 3D 360 camera so you have an idea of its size. 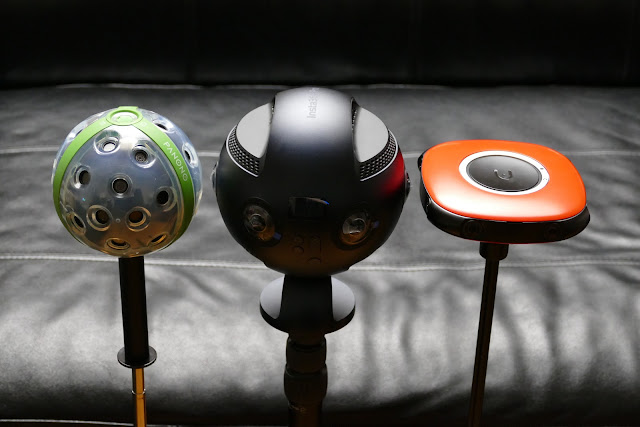 Although I have many 360 cameras (IIRC seventeen of them at this point, not including two that I’ve sold), I don’t own a rig (except for the Kodak SP360 4K Dual Pro, which is technically a rig).  Although rigs generally have very good image quality, they are a pain to use.  Besides the very high cost of a rig, and the cost of stitching software, they are too difficult and time-consuming to use and a lot of things can go wrong.

I was worried about the Insta360 Pro being difficult to use as well, and I’m happily surprised to say that the Insta360 Pro is a breeze to use.  Of course it’s not as fast to use as a 360 consumer camera (for example, starting up takes about a minute), but there are surprisingly only a few steps you need in order to shoot and share a photo or video.  In fact, if you use in-camera stitching, it really can qualify as one of the easiest 360 cameras to use (even compared to consumer 360 cameras)!  You don’t believe me?  If you shoot with in-camera stitching, you simply press the shutter and it creates a fully stitched 360 photo or video in the memory card!  Most of my other 360 cameras such as the Samsung Gear 360 can’t even do that. 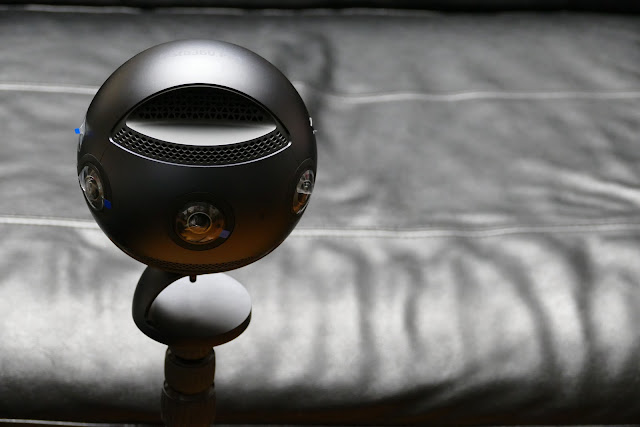 But even if you stitch the files on desktop using the Insta360 Stitcher software, I found it is still very easy to use.  Definitely easier than the SP360 4K Dual Pro for example.  First of all, there is only one SD card to use (not a separate SD card for each lens, unlike for example the Z Cam S1).  The photos and videos are saved into a separate folder for each photo and video.  Each folder contains all the individual unstitched files, a small preview file, gyro metadata for videos, and the stitched file (if you chose in-camera stitching).  If it is a 3D photo or video, you will also get the left eye panorama and right eye panorama in addition to the stereoscopic top-bottom stitched photo video.

Stitching a file is as easy as selecting the folder of a photo or video (you don’t need to select the individual files), specifying the desired resolution and other settings, then hitting Stitch Now or putting the files in a queue for stitching.  How easy is that???

There were pleasant surprises.  For example:
– high speed mode is up to 4K 120fps (not just 100 fps)
– RAW mode for photos is truly Raw.  Is it some proprietary raw format that will take months for Adobe to add?  No — it uses Adobe DNG format!!! 😀
– one of the modes is 4K 3D 60fps.  I didn’t even see that mode advertised.

I’m sure you have plenty of questions about it.  The geniuses at Insta360 figured an easy way to answer questions without requiring you to slog through a thick operating manual — using a flow chart!

Insta360 was careful to add that this is part of the first batch of Insta360 Pros, so there will inevitably be a few bugs.  But so far I haven’t encountered many bugs, and as with Insta360 Air and Nano, I am sure those bugs will be stamped out very quickly.

Anyway, as you can tell, I’m very excited about the Insta360 Pro.  I will take some samples and post them asap!  If you want to get the Insta360 Pro (yes there is a growing waitlist), it is available on Amazon or B&H Photo.  Thank you very much for using these affiliate links to support 360 Rumors at no additional cost to you so I can do more tests and reviews!