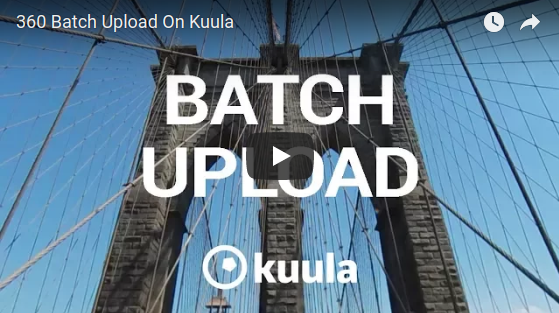 You can now easily share multiple 360 photos without getting stuck uploading them one by one, if you use Kuula 360 photo sharing platform.  Kuula has just added a new feature: batch uploading of 360 photos.

Kuula is one of the most popular 360 photo sharing platforms.  They have distinguished themselves from other photo sharing sites by constantly adding new features.  The latest one is batch uploading.

Here is a video demo:

I got to try out this feature the other day, which I used to upload the sample photos from the Detu F4.  It was straightforward and there were no hiccups.  BTW, this feature works on either desktop or mobile (on a mobile browser – no app needed).  After logging in, simply tap on the upper left corner to bring up the menu, and you’ll see the new Batch Upload option.

From the batch uploading screen, you can name the files individually, specify the privacy, and even add the photos to a collection (whether an existing one or a new one).  It worked as advertised and is very convenient.  Here is the official announcement.