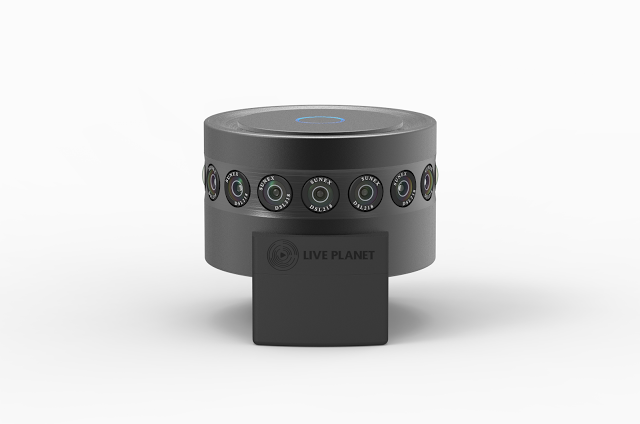 Live Planet is a 3D-360 degree camera with live streaming in 4k.  Previously called the Quantum Leap Pro, it was first announced in April and now more details are becoming available for the retail version.

The Live Planet camera uses sixteen DSL217C lenses, each with a 180 degree field of view, thus creating a fully spherical field of view without the need for a separate lens for the nadir or zenith. 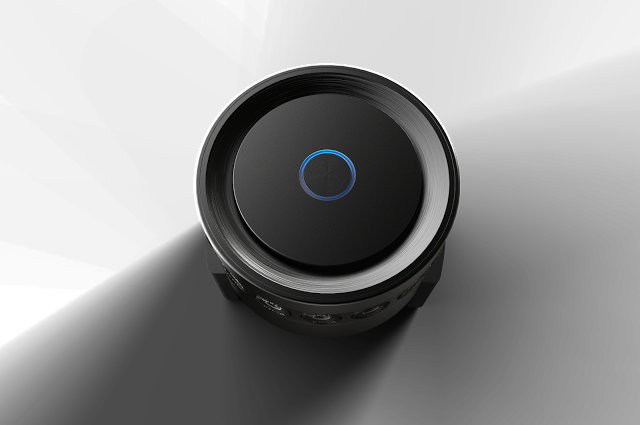 The Live Planet camera is remarkably compact compared to some 3D 360 camera rigs, at only about 4 inches length and 3.5 inches height, and 1.5 lbs. weight.
One technical problem with 3D 360 cameras, is the parallax stitching issue.  To create a 3D effect, the lenses have to be further apart.  If they are not sufficiently far apart, then the 3D effect will be diminished.  On the other hand, if lenses are farther apart, the parallax stitching error will be more noticeable (near objects will appear split in half).  The Live Planet camera ingeniously overcomes both issues by pairing every 4th lens (instead of the lenses next to each other).  The lenses would be farther apart (in this case, 70mm interpupillary distance) for a sufficiently 3D effect.  At the same time, the distances between the respective centers of each pair would be closer than the physical diameter of the camera.

In the diagram above, the blue octagon represents the “left eye” view.  The right octagon represents the “right eye” view.  Instead of pairing the lenses that are next to each other, the lenses are offset by 3 lenses (the blue arrow is paired with the red arrow).  This creates a greater IPD (compare the green brace with the blue brace) for greater 3D effect.  At the same time, the distance between the lens becomes smaller (the green arrow is shorter than the black arrow).

Here is a video from CNET about the Live Planet camera, showing a prototype:

“We take care of the hard technical challenges so that in 15 minutes, creators can setup the Live Planet™ camera, register on the Live Planet™ cloud platform, and start live streaming or storing (or on-demand playback) amazing stereoscopic virtual reality video of the highest quality, delivered to literally every headset your audience uses. This is the Live Planet 15 Minute Promise.”