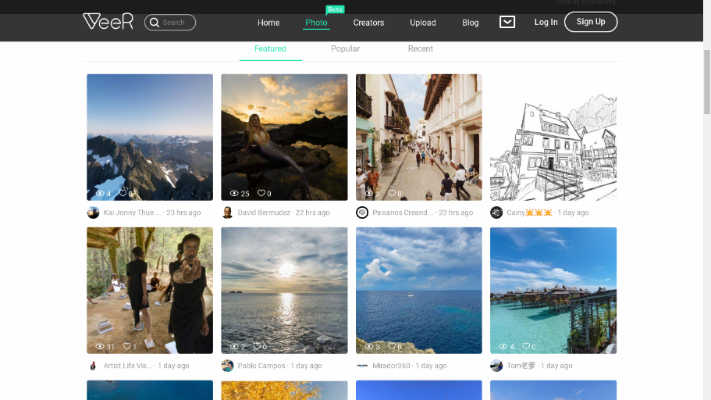 Many people (myself included) take both photos and videos.  The problem is that some platforms are only for photos, while others such as YouTube are only for videos, requiring you to setup accounts in more than one website, which can be tedious to manage.

Veer is a platform primarily for user-generated videos (as opposed to videos created by studios and brands), in 2D or 3D 360. Now they are expanding their platform to enable sharing of 360 photos. Their platform can accommodate photos of up to 8K resolution, in 2D. If you upload a higher resolution, it will be automatically be scaled down to their maximum resolution.    In the future, they will also support 3D 360 photos, which means they will be the only platform with complete support for 360:
– 360 video in 2D
– 360 video in 3D
– 360 photo in 2D
– 360 photo in 3D

To share photos on Veer, create an account and click on your profile on the upper right corner of the screen (do NOT click on Upload on the menu bar because that’s only for videos).  From your profile, click on the photo tab, and then on a blank photo. Here is a sample I shot with a Panono at 8K (1/4th of its actual 16K resolution).

Because Veer is committed to supporting all types of 360 media and viewers, I think it is one of the platforms that’s worth investing time with.  You can create a free account here.  As a reminder, if you upload a 360 video to Veer.tv and use the hashtag #madventure, you can win a new Madventure 360 camera (promo ends November 20).   Meanwhile, check out a couple of other photos posted on Veer: