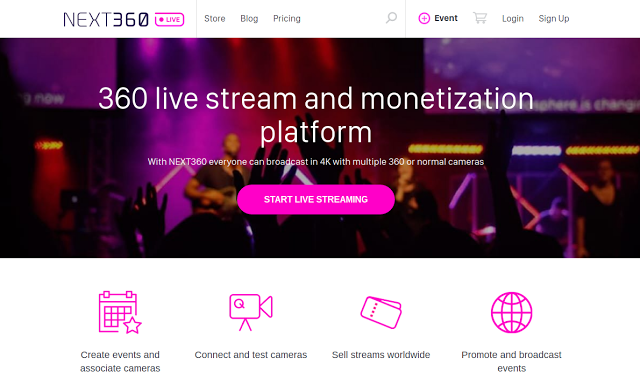 Instead of paying hundreds of dollars for a front-row seat at a concert, what if you could wear a VR headset and experience the concert in 360 / VR for much less, with the freedom to eat or drink anything you want in your favorite recliner?  That’s the concept behind a new service called Next360, which aims to assist creators in monetizing their livestreams, while providing more convenient access to events and concerts to viewers.

It is currently possible to live stream a concert or other event on YouTube or another live streaming platform.  However, there are several limitations.  First, the video quality with YouTube’s live streaming is limited.  Second, it is not yet easy to monetize the stream.  Third, streaming with multiple cameras is difficult.

Next360 is a pay-per-view livestreaming platform that addresses those issues.  It enables event organizers to livestream in 360 (or a non-360 camera) using several cameras, while allowing users to select the camera or perspective that they want.  Next360 support streams of up to 4k, and can transmit the stream at a bitrate up to 20mbps, for events up to 12 hours.

The way it works is that the event organizer pays a cost per camera based on the desired streaming resolution.   (Next360 does not impose minimum requirements on the camera type, although of course professional cameras will provide better quality for viewers.)  The stream can be viewed on Next360’s website, Next360’s app (available for Android and iOS), or embedded on the organizer’s site.  The stream can also be stored as a recorded video.

Viewers who want to watch the stream then pay a fee, as they would with a PPV show.  The organizer receives the revenue from the PPV sales, with 25% being paid to Next360.