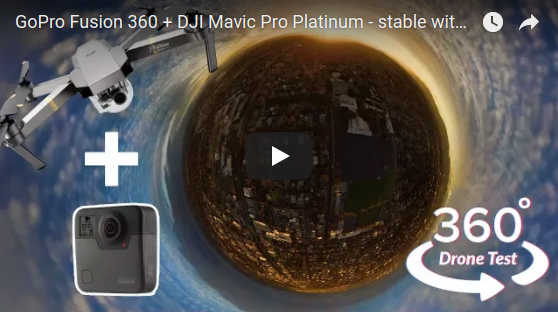 Hugh Hou of CreatorUp! posted a tutorial on how to shoot an aerial 360 video with a drone and just one 360 camera.  Here’s the sample video and the tutorial.

Hugh used the DJI Mavic Pro Platinum, an upgraded version of the Mavic Pro, with quieter propellers, and longer flight time. For his 360 camera, Hugh used GoPro Fusion. Here is part 1 of Hugh’s tutorial, where Hugh explains why he used the Mavic and Fusion, and how to attach the Fusion to the Mavic Pro.

Here is part 2 of the tutorial, where Hugh explains the postprocessing to transform the 360 video into a tiny planet, and to remove the drone from the shot.

Here is Part 3, where Hugh erases the drone for a 360 video (it’s a different solution from part 2)