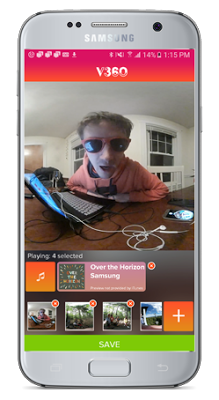 V360 is a 360 video editor for Android that allows you to make 360 video montages and add background music.  (Updated with new info)

V360 is a mobile video editor for Android specifically for 360 videos.  It allows you to make a montage of 360 videos and add your choice of background music.  It supports resolutions up to 4k. 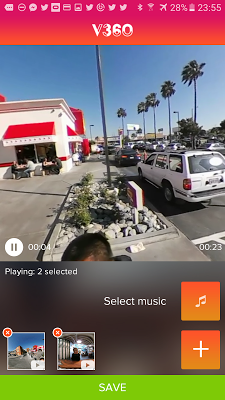 I tried it and it works.  You can add clips by clicking on the plus button then selecting the video from your photo gallery.  You can trip a clip by tapping on the added clip then dragging the ends of the video: 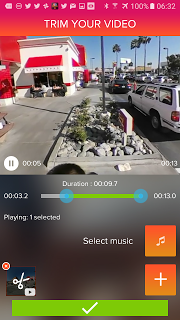 You can then add music.  It saves the video very quickly (on my Samsung S6 — ymmv).  It appears there is no noticeable deterioration in the video quality.

Here is a sample video edited with V360:

However, I noticed that the music will replace the sound in the videos, which may or may not be what you intend.  Future versions will allow you to mix the video sound and the background music. Another issue with the beta version is that the last few seconds of your video will be cut off and replaced with their logo animation (rather than the animation simply being added at the end of the video).  The developer said this is a bug that they will fix.

The future version will be more sophisticated and will include text and effects, and the ability to change playback speed.  V360 is available from the Google Play store here.

RELATED POSTS:
VRFix for Android and iOS fixes the 360 metadata in your 360 video

Combine and edit 360 videos on your phone with Collect
Straighten or realign your Ricoh Theta photos with this awesome app!
Comment