Which is the best 360 camera for virtual tours in 2020?  I compared eleven 360 cameras and a DSLR using the industry’s first objective comparison for detail and dynamic range.  To compare the cameras, I shot them in a typical but challenging scene for virtual tours: a dimly-lit bedroom with bright windows.   Here’s the video:

If you just want to jump the conclusion, see here.

THE TEST SCENE
Because this was a virtual tour camera comparison, it only made sense to test it using a scene that is representative of what we would encounter in virtual tours.  I chose to shoot in a dimly-lit bedroom with no overhead lights, and a bright window facing west, while I was shooting midday.  The highlight of the room was its view, therefore a window pulldown was absolutely required.  At the same time, it was a bright day with sunny-16 conditions, and it was quite challenging to capture the full highlight detail of the window while also capturing the shadow details of the bedroom.

OBJECTIVE COMPARISON OF DETAIL, DYNAMIC RANGE, and EASE OF USE

One issue with 360 camera reviews is their subjective nature.  It is hard for buyers to compare 360 cameras when one reviewer’s “amazing” can be another reviewer’s “good.”  To minimize confusion, I created ways of comparing cameras objectively for detail, dynamic range, and ease of use.

To compare detail, I created a uniform resolution scale, where each half point corresponds to an increase of 1 stop in detail (2X detail).

Finally, to compare ease of use, I determined the number of steps required from shooting until sharing.  Cameras with fewer number of steps score higher, with a maximum of 10.0, for a camera where the only step is to take a photo, such as a standard JPG photo from the Theta V (reviewed here) or GoPro MAX (reviewed here).

Cameras with additional features such as bracketing or built-in HDR were able to reduce the number of steps to shoot and process the photo, resulting in a higher score than a camera without such a feature.  Some steps required more time, and I took that into account.  For example, Labpano Pilot One has only two steps: take the photo and stitch the photos in the camera.  However, the latter takes up a lot of time, therefore its ease of use rating is 8.5, unlike the theta Z1 HDR which also has only two steps but requires very little time.  Using this scale, cameras with the same score will have similar level of convenience.  For example, a DSLR and GoPro Fusion manual HDR both have a score of 6.5.  If you ask me which I would prefer to do, I would say I would be indifferent.

I also added “penalties” for cameras that lack essential features such as a self-timer.  The rationale is that these cameras are harder to use, or take more time to use, hence it is similar to having one or more additional steps (see “no self-timer penalty” in cell H6 for GoPro Fusion Raw).

The XPhase is unique because it has a very simple workflow because it can stitch and merge HDR photos in one step.  However, it is prone to stitching errors and glare, and it takes time and skill to fix those errors. I therefore gave it two scores: 8.0 for its workflow but 6.0 if you need to fix the stitching and/or glare.

One issue with comparing 360 cameras is the editing.  Some cameras are highly processed by the in-camera processor.  Other cameras have a lot of potential but require editing to bring out that potential.   How do we compare these cameras and for example, how aggressively do you use sharpening or other adjustments?  To resolve this, I created two scores for cameras where the potential had to be unlocked through editing.  The first score is for a fast workflow with little or no editing.  The second score is for what I call the “HQ method,” which is a workflow that increases the image quality significantly but is still a realistic workflow for virtual tours where you have to take dozens of photos.  I’m working for the tutorial for the HQ method, which I will post here.

You can compare these samples side by side using the updated 360 Camera Comparison Tool.  Here are the top 5 cameras (not including DSLR): 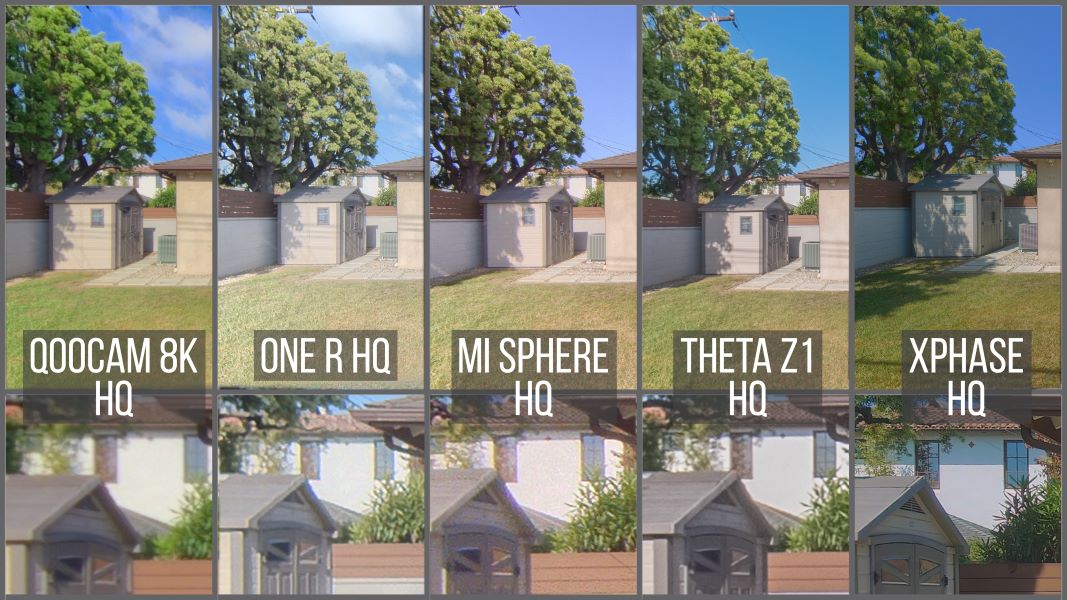